Two people have a disagreement. One party makes her opinions public on the Internet, the other decides to keep things private. It leads to a petition, requests for official mediation and, for the aforementioned party at least, a lawyer.

Said lawyer makes the request for mediation, that her client has sent to the other party, public on her blog, just like said party has previously done with her reactions to the disagreement.

News media pick it up, a logical result.

[For some readers the identity of the parties won’t be a mystery, but I think the identities do not matter. It’s about the case, not the people.] 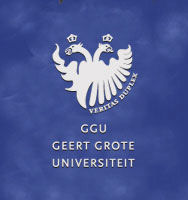 The Geert Grote University in Deventer, a small private academic institution named after the founder of the Devotio Moderna in the Middle Ages, announced today that it is going to establish a trust fund to encourage the development of a ‘Dutch Catholic intellectual elite’. The trust fund will be named for 16th century noblewoman Anna of Twickelo who willed a major part of her inheritance to be used for the establishment of a Catholic university in Deventer. That never happened for various reasons, until the Geert Grote University was established in 2006.

University chairman Jeroen Buve says, “The Geert Grote University wants to achieve the rise of Catholic academics that can make a difference. The enormous silence of the Dutch Catholics must come to an end. This trust can help.” Buve emphasises the importance of intellectual leadership that does not hide its Catholic identity. “Catholic leadership could have prevented the credit crunch. That is not a matter of intelligence, but of intellect. An intellectual does not fly a plane into the Twin Towers, an act that intelligent people were capable of.”

As a part of a general trend among Catholics, I am all for a Catholic elite which is truly Catholic. A well-educated social group, which can defend and explain the teachings of the Church to a signifcantly secular audience, both within and without the Church. And is the latter, the audience outside the Church, that is hardest to reach. In recent years, Catholics may have been rediscovering the gift of speech, but it has almost exclusively been speech among themselves. In order for the Church to do more than simply maintain herself, she must be a visible and audible presence in society as a whole. Can an elite help in that? Perhaps, as long as it does not remain limited to itself, to study and publication for a small audience. That too has its merits, certainly, but not when it coems to reaching out. The people must step forward, capable, knowledgeable and comfortable in their faith. A tall order, perhaps, but not as ultimately tall as sitting back and doing nothing except for talking amongst ourselves. 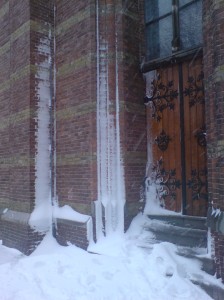 The front of the cathedral, snowblasted during the night.

The combination of snow, wind and freezing temperatures made being outside a chore this morning. The attendance at Mass was subsequently lower than usual and the walk towards the cathedral something like an obstacle course. Still, it was very much doable, although I wouldn’t want to have been outside the city, where motorways saw moving snowdunes and stalled cars. Decidedly un-Dutch circumstances. 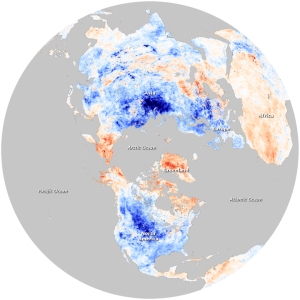 NASA’s Terra sattellite shows that december really was colder in the northern hemisphere than usual, compared to the average temperatures between 2000 and 2008. The culprit is apparently something called the Arctic Oscillation. That has to do with the pressure difference between the mid-latitudes (temperate areas such as southern Canada and central Europe) and the Arctic which is smaller than usual, allowing cold air to creep southward and warmer air north.

The image also counters the thoughtless suggestion that one cold winter proves that there is no global climate change: the Greenland ice cap is quite a lot warmer than normal. Fun things may ensue if that melts.