The earthquake that struck the area around Port-au-Prince in Haiti won’t be news to anyone anymore. The area looks quite devastated and I can only guess at the number of casualties. This poorest nation in the western hemisphere has no means at all to get back on its feet on short notice, so international aid is essential now.

Many charities have already appealed for donations. The BBC lists a few, with links to their websites where you can donate. First Things also has an extensive list of charities.

The Church in Haiti has also not escaped unscathed. The majority of the Haitians are Catholic and the communities and parishes that can have become relief centers. Sadly, the Haitian Church lost its primate, Archbishop Joseph Serge Miot of Port-Au-Prince (pictured), to the disaster.  The body of the 65-year-old prelate was found in the rubble of the archdiocesan offices.

“I invite everyone to join in my prayer to the Lord for the victims of this catastrophe and for those who are mourning their loss. I assure my spiritual closeness to people who have lost their homes and to all those affected in various ways by this calamity, imploring from God consolation and relief of their suffering.

“I appeal to the generosity of all people so that these, our brothers and sisters who are experiencing a moment of need and suffering, may not lack our concrete solidarity and the effective support of the international community. The Catholic Church will not fail to move immediately, through her charitable institutions, to meet the most immediate needs of the population”.

Caritas Internationalis, the Vatican-based umbrella organisation of Catholic charities, already has an emergency relief team in Port-au-Prince and is mobilising more people and means.

Our Lady of Perpetual Help, patron of Haiti, I pray you; console and guide the people of Haiti in this dark hour. May they always experience the presence of the Father, and may those who have lost their earthly lives see Him from face to face. May those who risk their lives to help the victims succeed and rebuild society.

I also ask you to pray for the Church in Haiti, who has lost her spiritual father. May they not wander alone in the dark. May Archbishop Miot continue to be their shepherd in prayer, in the eternal light of the father.

I pray this through Christ Our Lord. 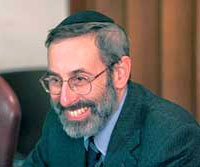 Rabbi Riccardo Di Segni welcomes the upcoming visit of Pope Benedict XVI to Rome’s main synagogue as a sign of the commitment of Jews and Catholics to respectful dialogue. He does admit, however, that there is a storm every now and then.

These storms are things such as the Holocaust-denial of Bishop Williamson, or the veneration of Pope Pius XII, but the key problem, according to Rabbi Di Segni, are the mixed signals about the religious significance of Judaism he preceives from the Church.

“From a strictly religious point of view, the question is the significance of Judaism. Has its role ended? Must we all convert?”

These mixed signals are the insistence on the ongoing role of the Jewish people in salvation history, while also emphasising the importance of recognition of the Messiah.

But the rabbi says that the gestures of this pope and his predecessor have been vital for the mutual respect between Jews and Catholics. “We experience this each day, even though there may be scattered pockets of resistance or fundamentalist attitudes or even hostility”.

About the upcoming visit, he said that it is “a symbolic continuation of the gesture made by John Paul II, who was the first pope to set foot in a synagogue in 19 centuries. There is precedence, though.” The precedence being St. Peter, obviously not unfamiliar with synagogues.

“Times have changed,” the rabbi said. “Many things have been achieved; other things still need to be done. The path, the Jewish-Catholic encounter, is terribly complicated. It is not a smooth road leading onward, but it is one continually filled with stumbling blocks. The visit of a pope to the synagogue should demonstrate that beyond the stumbling blocks there is a substantial desire to communicate with each other and resolve problems.”

While the obstacles are acknowledged, I get the impression that this visit will not be as problem-ridden as some people feared earlier.

Various Catholic news sites bring the news from Andrea Tornielli that Rome will announce the new archbishop of Mechlin-Brussels within the next few days. And it will be André-Mutien Léonard, currently bishop of Namur. If true it would bode very well for the Church in Belgium. Msgr. Léonard is an orthodox and practical man, firmly in line with Rome. The only slightly problematic thing would be his age: he is 69 years old, and will tender his resignation in six years. That would perhaps not be long enough to have the truly significant impact that the Belgian Church needs.

We’ll see, though. It sounds like good news, but it is still a rumour.

Yesterday I received a request from Father Roderick, a friend and priest in the Archdiocese of Utrecht, to show some support for his archbishop, Msgr. Wim Eijk. As I’ve reported earlier, and as other Dutch Catholic blogs and media are reporting, he is being attacked for the decisions he makes from left, right and center. While he keeps his feelings and private responses to himself, I am assured that this is not an easy time for him.

After the request I sat down and wrote a one-page email of support to him. This morning I received a reply from the secretary of the diocese, thanking me for the email and assuring me that it will be sent on to the archbishop. Inge send him a card with similar sentiments yesterday afternoon.

Reading the blog of the lawyer of one of the archbishop’s attackers once again made me angry. She manages to accuse him of making personal attacks. That is simply more evidence that she lives in a world of anger and frustration of her own making, which has little to do with the real world where ethical behaviour and civilised discussion should be the norm. Sadly, that is true for a fair number of other people too, bloggers and non-bloggers alike.

So, in light of that and of the fact that supporters of the archbishop are simply less vocal than the attackers, I’d like to ask the Dutch readers of my blog to take a few minutes and write a short note or a card of support to Msgr. Eijk. It can be a simple assurance of you remembering him in prayer or appreciation for his work.

Bishops are our shepherds, ordained and consecrated to lead us on the path of Holy Mother Church, especially when we’ve strayed, as so many in the Dutch Church province have done in the past. Shepherding people and the institutes that come with a diocese is not necessary great fun, despite its pastoral image. For the good of the flock, hard decisions are sometimes required, because the soft approach takes too much time or is just not effective.

E-mails may be sent to the secretariat of the archdiocese, which can be found here.

Yesterday at Mass at the cathedral, I noticed something different on the high altar. Mass took place at the St. Joseph altar to the side, so I was looking at the high altar from a bit of a distance and at an angle, but at first it simply seemed as if the veil in front of the tabernacle had somehow fallen down halfway. I looked again, and then noticed it was the middle of three altar cards! 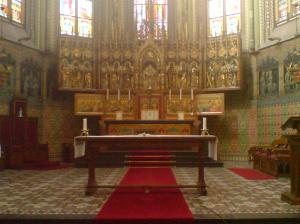 Altar cards are used in the extraordinary form of the Mass, and contain prayers which the priest prays at various points. Would this be an indication that we would be having at the very least an ordinary form Mass ad orientem in the cathedral?

I asked Ad, the sacristan, about it afterwards, and he told me the altar cards were found in the safe in the sacristy and Fr. Wagenaar decided that they belonged on the altar instead. Of course they do, these are meant to be used, not to stored away.

But sadly, placement on the altar was to be their only intended use. No ad orientem Masses, let alone extraordinary form, at the cathedral. Not yet at least, for I remain optimistic.

I later heard the cards were back in the safe, since they blocked the tabernacle. In a way, that’s better, I think. If they are not going to be used, then why bring them out?