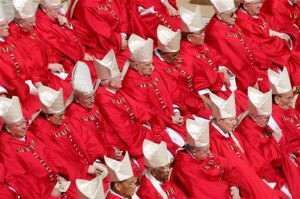 In the National Catholic Reporter, John L. Allen shines his light on future cardinals. He writes and creates the following list:

There’s also a slew of Vatican officials in a holding pattern to join the College of Cardinals, including:

There is not much overlap with the list I created here, although that can be said to be due to the fact that I took the next two years in consideration, while Allen focusses solely on this year. Still, Archbishop Eijk is among them, as is the new archbishop of Brussels, Msgr. Léonard, and he mentions the possibility of new cardinals in African sees, like I did when I pondered the possibility of a new cardinal from Cameroon.

Allen’s list is a very western affair, with many cardinals from Europe or North America. Traditionally, Europe is the place where important members of the curia come from, of course, so perhaps the lack of African and Asian prelates is due to the fact that the current cardinals from there are still so relatively new (elevated by Pope John Paul II) that they’re not too close to retirement yet.

I have some reservations about Allen’s list, though. Both archbishops Eijk and Léonard are new enough that they could be kept waiting a while (Léonard is not even installed as archbishop yet), and the same may be said for Archbishops Nichols, Dolan, Marx and Burke. However, we will undoubtedly see in due time, quite possibly somewhere before the end of the year.

7 thoughts on “Cardinals according to John Allen”