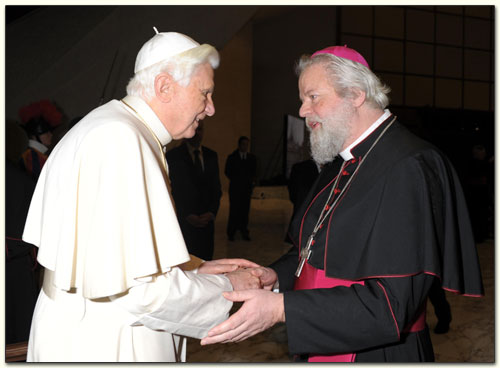 Bishop Jos Punt of Haarlem-Amsterdam was in Rome last week, where he met with officials of the Secretariat of State and a number of Congregations. He also met with Pope Benedict, with whom he spoke about recent developments in the Church in the Netherlands, as well as other topics.

There’s one conversation I would have loved to have heard…

Pope Benedict is not unfamiliar with the Dutch Church. He is able to speak Dutch with a certain degree of fluency, and considers himself a ‘spiritual architect’ of the Rolduc seminary in the Diocese of Roermond, the first of its kind in the Netherlands after Vatican II when it was established in 1974 by Bishop Jo Gijssen.

Source: Diocese of Haarlem-Amsterdam and RKK.nl

There has been some significant reporting in the media about the abuse cases that have been revealed to have taken place in a boarding school run by the Salesians of Don Bosco in the 1960s and 1970s. I have refrained from reporting on it until now, in part because I’m waiting for the letter that Pope Benedict has written to the faithful of Ireland. It is rumoured that, following the abuse cases in Germany, Switzerland and the Netherlands, that letter will be aimed at faithful everywhere, and not just to those in Ireland. A publication is expected sometime this week.

Yesterday, Bishop Ad van Luyn of Rotterdam, chairman of the Dutch bishops’ conference, has spoken about the case on TV. The bishops’ conference is meeting about this topic tomorrow, so the statement from Msgr. van Luyn are nothing more than his own opinion.

He said, among other things: “It is the duty of the Church to condemn this abuse clearly and forever, and also to offer apologies and to take any steps to assure prevention in the future.”

“Personally, I am convinced that an independent investigation would best meet the justified expectations of the victims, society and also the church community.”

To the victims he said: “I think that, in the first place, the victims should meet with those now responsible for those institutions where these things happened. A meeting that is both honest and transparent, that leads to recognition of the facts, that leads to apologies for the suffering afflicted, and that leads to compensation where possible.”

From Rome, Cardinal Kasper has spoken especially forcefully against child abuse by clerics. he called it “criminal, shameful and unacceptable,” and indicated that the pope will be acting decisively, as he did towards the case in Ireland, where several bishops were called to step down because of their silence. 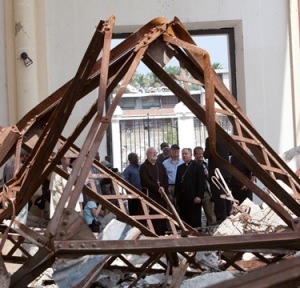 In his blog, Sean Cardinal O’Malley, archbishop of Boston, writes about his recent visit to Haiti. On behalf of the Church, the United States Conference of Catholic Bishops coordinates the relief efforts in that country, and Cardinal O’Malley is a member of a 5-person committee that is to assess the needs of the Church there.

There is still a lot of need for aid in Haiti. As the cardinal writes: “Port-au-Prince is a disaster area. There’s no water, electricity, or basic services.” Many people still live outside in tents, cars or other temporary shelters.

It is good to see that the Catholic Church, together with the international community, makes such a difference in a country on the edge of chaos, and continuing to do so.

Cardinal Seán, as he refers to himself in his blog, offers a great example of social media use by a prelate of the Church. He very regularly updates his blog – usually every Friday – with very simple reports of what he has been doing in the week preceding. It’s at the same time local (concerning the Archdiocese of Boston) and international (not just because of the cardinal’s work in Haiti and his many contacts in Latin America, but also because he is a Franciscan, usually walking around in the simple brown habit of his order. Even in his office of archbishop and as a cardinal, he manages to personify the simple spirituality of St. Francis). A simple and effective way of reaching out to people.