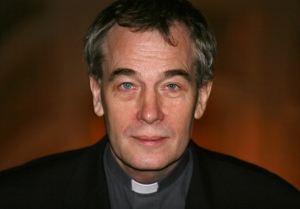 Well-known Dutch priest Fr. Antoine Bodar will be lending his name to and performing editorial duties for a glossy magazine that will be published on 16 January 2011. Of course, why the creation of a magazine must take more than six months is anyone’s guess, but that’s just a detail.

The publishers of ‘Antoine’ state that their magazine will offer “entertainment, in-depth interviews, reflections, travel reports, meaningfulness […] the things that matter.” They’ll even offer recipes and liturgical fashion (something of a contradictio in terminis, surely?).

It may be clear that I am quite possibly not the intended audience of this magazine. (indeed, the target reader is typified as “a woman around 40 years of age, married with two children, living in a medium-sized green town. She likes quality. She cycles, likes nature, would like to read more, but also spends time on family and society.” Not me, in other words.

A glossy… Isn’t the time that any semi-famous person attached his or her name to a publication mostly over now? Fr. Bodar himself is hardly unknown of course, having been on TV several times in the wake of the abuse crisis and he also remains a prolific author. I have no doubt that the magazine will have his characteristic blend of religion and culture and a slightly aloof tone: the man is educated and not afraid to show it in his vocabulary, for example.

‘Antoine’ presents itself as wanting to answer the inherent fascination that people have for religion. Providing a authentic Catholic answer to the search for general spirituality is a necessity, especially in the Netherlands, where the Church is still too quiet. A one-time glossy can be a step in that direction, but I wonder if it’s not too little, too late.