Pope Benedict XVI is visiting the Italian diocese of Sulmona-Valva today, where he will also visit the grave is his thirteenth-century predecessor, Pope Saint Celestine V, who was pope for less than four months in 1294. Short papacies are not unusual, but they tend to end because the pope in question passes on. Not so in the case of St. Celestine. 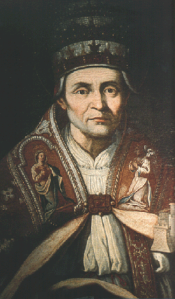 The conditions of his elections to the papacy was an unlikely story, and in fact the man himself was perhaps one of the most unlikely candidates to be put forward by the cardinals who had already been gathered in a conclave for more than two years. Political intrigue and manipulation lead to the election of a simple monk, a hermit who had left behind the care of a congregation of ascetic Benedictines had been inspired by him, and thus called themselves Celestines, and who was now pulled into the heart of the machinations of the king of Naples who would use him to regain power over the Sicilies.

In August of 1294, the 79-year-old hermit became Pope Celestine V, and he soon fell under full control of King Charles II of Naples. He was clearly overwhelmed and unable to do much as pope, not just because of his ‘honorable custody’ but also because he simply lacked the talent to get the work done.  He was a hermit, simple and pious, and acted so as pope: simplistically and naive, And the unique thing is that he realised that himself. So in December of the same year, Celestine V became the first and only pope to resign. He desired to return to the life of a hermit, but his successor, Pope Boniface VIII, would have none of it. Celestine did escape for a while but was soon caught when trying to escape to Greece. He spent the rest of his life in captivity until his death in 1296.

Politics and prayer don’t necessarily mix well, and Pope St. Celestine V was clearly a man called to the latter. His life removed from society made him ill-prepared for life in the chaotic hubbub of Rome and Naples, and it took some self-knowledge to realise that and consider the highly unusual step of resigning from the papacy. After all, the pope is the highest authority, so who does he offer his resignation to? Then again, he is also the servant of the servants of God, so it would be the other servants, the people of God, who would receive his resignation.

He was canonised in 1313 and lies in the cathedral of Aquila.

One thought on “The pope who resigned – St. Celestine V”