Footage from the centuries-old procession in honour of the Blessed Virgin of Leeuwarden, which was held yesterday. The focus of the procession is a small 16th-century statue of Mary which, at the time it first appeared in the records, was the focus of a pilgrimage and seems to have several miracles attributed to it. Until the Reformation it was carried through the town of Leeuwarden in a procession. The last time that happened was around 1578, and certainly no later than 1580. But that date can be changed now: the last time the procession happened was in 2010. Yesterday to be exact.

Accompanied by a marching band, clergy from across the diocese, the bishop, acolytes and several hundred faithful, the statue was carried from the church of St. Boniface to the one consecrated to St. Dominic along part of the medieval procession route.

Considering the resurgence of this practice, especially considering how long it has been since the procession was last held, is quite awe-inspiring. That’s not to say that Our Lady of Leeuwarden was forgotten all those centuries,, because she wasn’t, but her statue never went outside again in any formal fashion. Until yesterday, that is. 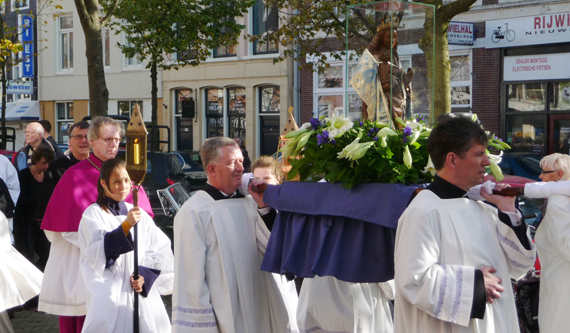