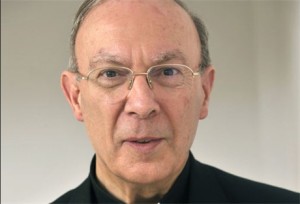 Despite the ever-present risk of one’s words being taken out of context in today’s media, Arcbishop Léonard of Brussels consciously decided to not change some of the words in a new book of interviews with him. The book in question is titled ‘Mgr. Léonard – gesprekken’ (Msgr. Léonard – conversations), and was written and compiled by two Belgian journalists.

In one of the conversation, Msgr. Léonard speaks about the AIDS epidemic. He says, “So I do not see this epidemic as a punishment, but at the most as a sort of immanent justice, sort of like how, in ecology, we are faced with the consequences of what we are doing to the environment.”

The conclusion made here and there is, predictably, that Msgr. Léonard sees AIDS as a form of justice. But that’s too simple a conclusion. I think, upon reading these words, that the archbishop most of all wanted to say that the epidemic is (at least partly) a result of our own actions. And in that way it can be seen as justified. We made it possible, after all.

Léonard’s spokesman, Jürgen Mettepenningen, was hesitant about these words, as he explained on radio today. “I wouldn’t have said it like this. [The archbishop] left the sentence unchanged because he says that he can’t write anything but what he thinks. […] I shouldn’t be saying what he should think. I am the spokesman, not a decider of words.”

Maybe the exact wording was not wise to use, but they do deserve to be read for what they are: an acknowledgement of our responsibility when it comes to the spread of AIDS and not some divine punishment.