A first in my blog today: a proper guest blogger. Ingrid Airam, who usually blogs in Dutch about all kinds of Catholic topics, describes her experience of participating in a March For Life in The Hague and shares why she could do no less but participate. Her contribution starts underneath the photo. 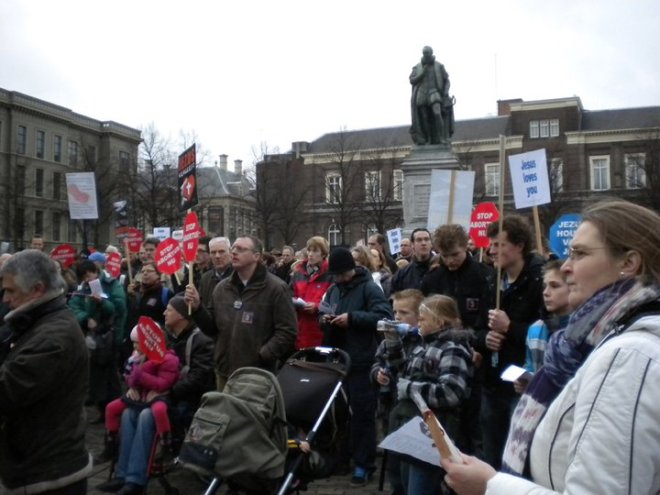 The March for Life, something I had heard of once in a while, and by chance  read about on the website of the church of Saint Agnes in Amsterdam, about a week before the march would be held this year. Well, by chance… in some ways it obviously wasn’t. But considering the marginal attention (one can safely say none at all) offered by other parishes in the Netherlands it was. A march against a so-called medical procedure which is legal in the Netherlands. Theoretically only in emergencies, but that word proves to be very flexible in practice.

So why in Heaven’s protest against which is so commonly accepted in this country? Not even simply accepted, but something that is considered by many a right and a sign of civilisation. Essentially it’s very simple: I am pro-life in heart and soul, but also with a  considerably amount of sense. And although I really understand the difficulties of a woman faced with such a choice, I consider it barbaric, to quote one of our listeners. And when I am full of words about sanctity and worth of protection of life, wouldn’t it be weak not to participate in such a march? And so I considered it nothing more than my Christian, no, even my human duty to walk – even though it probably wouldn’t make much of a difference, least of all in politics – even though, as a student, I have little money to spend and traveling costs money, after all. I simply couldn’t do anything less.

And so,this Saturday, 11 December 2010, I stood on the Plein in The Hague. A fair number of Catholics had attended a traditional Mass beforehand and had come to the Plein from there. It wasn’t an enormous number, but still a fair number of people. And so many different people: from children to elderly, many young people, Protestants, Evangelicals, Catholics… Beforehand some words from Minister Dorenbos, as far as I know one of the initiators, although I am not sure, encouragement from a Belgian pro-life movement (Catholics, as I found out later when we were walking right behind them, and all of them young), and some testimonials. One of them from an elderly lady who had undergone an abortion, and a younger woman of, I would say, about my age. Impressive and certainly encouraging. By then many people had their placards in hand, with texts as ‘Stop abortion now’  and ‘Jesus forgiver’. hen we left. I don’t know the exact route anymore, since I’m not at all familiar in The Hague, but I think we generously avoided the Binnenhof [seat of the Dutch parliament – MV]. I was somewhat surprised at how quiet it was along the route. Apart from a shouting woman, a few signs and two troublemaker it was quiet. My tension abated somewhat, and armed with a rosary and police around us (honestly, compliments for them on this day) we walked the route in relative quiet. Passers-by stopped, often with surprised looks, taking pictures.

Back at the Plein there were speeches. They started well, powerfully. Among them a man from America who hadn’t been supposed to be born according to his mother and the doctors: but the abortion failed. Another proclaimed that we, in the Netherlands, of whatever denomination, should make this a priority in our prayers, to stand up for life.

I don’t recall the later speakers as much, it was too much. But the fact that these people were so clear… I wish our bishops and priests would join this, and make this an important point on the agenda. Because, although there was a decent number of Catholics, there was all of one bishop (Msgr. de Jong, who deserves all accolades, and who also said a few words), two priests from the FSSP and one from the SSPX, it was a very meager showing. Granted, it is an originally Protestant march, but that does not diminish the importance of the march and the common goal. The Catholic Church offers clear teachings about this, a message of love. And so we should join our forces for this. Christians in the Netherlands, in Flanders… let’s unite, pray… and be on the Plein next year with a much larger number! 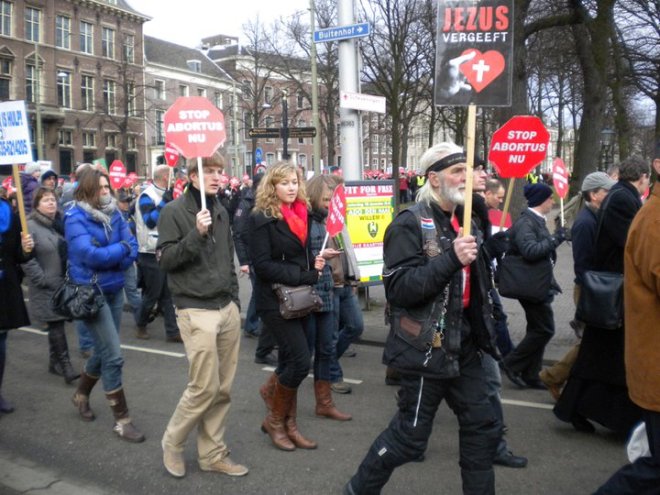 2 thoughts on “Guest blogger Ingrid on the March for Life”