On the one-year anniversary of the earthquake that devastated much of Haiti, especially the capital Port-au-Prince, the Catholic Church makes an effort to continue to assist the hundreds of thousands victims. Robert Cardinal Sarah of “Cor Unum” is in the country to coordinate continued practical aid, and today Pope Benedict XVI gives the people of Port-au-Prince a new spiritual shepherd.

The previous archbishop of the city, Msgr. Joseph Miot, died in the earthquake, but now his successor has been named. It is Msgr. Guire Poulard, until today the bishop of Les Cayes, also in Haiti. A year-long vacancy of a see is not out of the ordinary, although it’s not the rule either, but this appointment is undoubtedly timed to coincide with the anniversary of the earthquake and the death of Archbishop Miot. In the overwhelmingly Catholic country, it will boost morale for many, and hopefully Archbishop Poulard, cooperating with the Catholic charities, and the American bishops coordinating those, can give a renewed sense of purpose to the people and the aid they still barely receive. 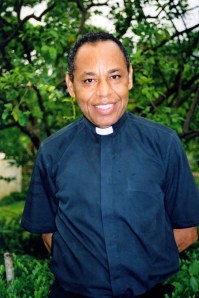 The archbishop-elect is the tenth bishop of Port-au-Prince. He was ordained a priest for the archdiocese in 1972. In 1988 he was appointed as bishop of Jacmel and in 2009 of Les Cayes.

At the same time as Msgr. Poulard’s appointment, the administrator of the remains of the cathedral, Msgr. Glandas Toussaint, was appointed as auxiliary bishop of Port-au-Prince. His titular see will be Senez, a former diocese in France that dates back to the fifth century.