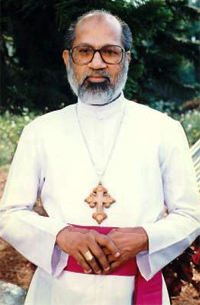 It seems that 2011 is shaping up to be the year in which the eastern churches united to Rome are picking new major archbishops and patriarchs (which, I assume, sounds like bad news for those men who are still in good health or relatively young), for, after the Maronite Church elected Bechara Pierre Raï as their patriarch in March and the Ukrainian Church picked Sviatoslav Shevchuk as major archbishop very shortly after that, it is now the Syro-Malabarese Church of southern India to get a new chief shepherd.

The Syro-Malabarese Church is a church with its own rite and culture in union with Rome. Its heartland is the southern Indian state of Kerala and it traces its origins to the evangelisation efforts of Saint Thomas the Apostle, who, tradition says, travelled to India after the resurrection of the Lord to spread the good news there.

The Syro-Malabarese Church has one major archdiocese (of which more below), four regular archdioceses and twenty-four dioceses (twenty-three in India and one in the United States). There are also four religious orders. The Major Archdiocese of Ernakulam-Angamaly has pride of place among these, and on 1 April of this year it lost its major archbishop, Cardinal Varkey Vithayathil. After his death the bishops of the church came together in conclave to elect a successor and, as is customary for the eastern churches in union with Rome, it is up to the pope to confirm the election. Pope Benedict XVI did not hesitate in doing so and yesterday Major Archbishop George Alencherry was confirmed as the new head of the Syro-Malabarese Church.

Major Archbishop Alencherry is 66 and before his election he was the bishop of the Diocese of Thuckalay on India’s far southern tip, a position he had held since 1996. Mar Alencherry has been a priest since 1972.

The website of the archdiocese, linked above, announces that Mar Alencherry will be installed next Sunday, the 29th. The same website also offers a profile of the new head of the 3.6 million Syro-Malabarese Catholics.

3 thoughts on “After the Maronites and the Ukrainians, a new chief shepherd for the Syro-Malabarese”