In a recent interview for Knack.be, Antwerp’s Bishop Johan Bonny spoke about the recent initiative from hundreds of laymen and priests in Belgium to challenge such teachings as priestly celibacy and the ordination of women.  It has triggered, as may be expected, a heated debate with some reaching the conclusion that priests signing the initiative are automatically excommunicated. While I won’t go into the reasoning for that here, I will take a look at what Bishop Bonny says about it all:

“I fully understand it. The Church can not avoid the debate about the criteria for ordination. Personally, I strongly believe in the value of the unmarried priesthood and a full availability for Christ and the Church community. But I also think that the ordination of a number of married men or deacons to the priesthood can be an enrichment for the Church. In the eastern Catholic Churches married priests are more the rule than the exception. That fact is therefore not unfamiliar for the Catholic Church. The ordination of women to priests is theologically far more difficult. In the west that concern is present in broad layers of society, but worldwide the support is extremely small. But I do think that there needs to be more discussion about the place and role of the woman in the Church. Women must be allowed to take on responsible duties in the Church, on all levels.”

The bishop’s reasoning, while necessarily simplified, makes a certain amount of sense – the celibacy debate does not concern the suitability of individual married or unmarried priests, for example – but it also raises problems. For one, the way the bishop presents his points leaves the door wide open for misunderstanding. People in the know may grasp what he tries to say – or not – but those outside the Church will not. Men and women must indeed be allowed to take on duties in the Church according to their individual competencies. But what are the ‘levels’ the bishops mentions? Are those the levels of government, pastoral care, parish council duties, or even Holy Orders? Probably not the latter, considering what Bishop Bonny said earlier about the value he attaches to the unmarried priesthood and such, but many will not see it as such.

And this is indicative of the communication problem of the Church and her bishops. Their intentions may be good, their reasoning sound, but they can still inadvertently communicate the polar opposite of what they mean. We – bishops, priests, religious and laity alike – have the duty to be open, honest, but certainly also clear about what we belief, and why. A comment like the one above will only strengthen the opinion of many that married men and women should be ordained as priests. And that is not something a bishop can and should say, even if he does so inadvertently. 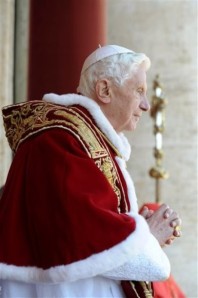 This Christmas’ Urbi et Orbi message to city and world has a very fitting, if totally unplanned link with the overriding theme of this blog in the week leading up to Christmas. From the last O antiphon, Pope Benedict XVI takes the call Veni ad salvandum nos! to underline our innate need for help in overcoming the difficulties and dangers of our lives.

Heralding in the new year, as his Christmas message to the Roman Curia looked back on the year past, the Holy Father calls our attention to the Child of Bethlehem as our Saviour, the one who “was sent by God the Father to save us above all from the evil deeply rooted in man and in history: the evil of separation from God, the prideful presumption of being self-sufficient, of trying to compete with God and to take his place, to decide what is good and evil, to be the master of life and death (cf. Gen 3:1-7).  This is the great evil, the great sin, from which we human beings cannot save ourselves unless we rely on God’s help, unless we cry out to him: “Veni ad salvandum nos! – Come to save us!””

My translation is here. 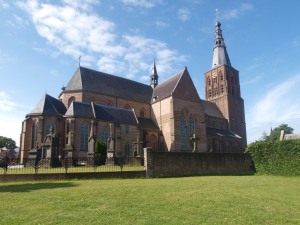 The first requests to elevate this church date from 2006, and were made by the current parish priest, Father Richard Niessen.

A church may be given the title of minor basilica (major basilicas are the four main churches of Rome)  for reasons of outstanding beauty, age or size, although in this case one of the reasons may be the presence in the church of a 14th century piece of cloth which contains bloodstains from spilled consecrated wine. A procession to commemorate this Blood Miracle is held every year in Boxtel.