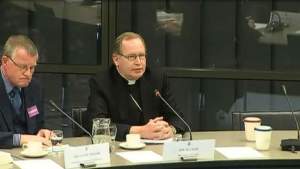 In an unprecedented hearing yesterday, Archbishop Wim Eijk spoke to politicians about the abuse crisis and the work that is being done by the Church in the wake of the Deetman report. It seems that even now, there are things we can learn, most specifically from Belgium: there new raids of diocesan offices took place, whereas over here the Church seems to try and work with the state to find solutions. Or the state with the Church, for that matter.

Yesterday’s hearing came after a letter from Justice secretary Ivo Opstelten, which explained that abusers whose crime fall under the state of limitations, since they took place decades ago, can not now be prosecuted after all. Which, as victims’ organisations pointed out, does not mean the Church can’t take steps against these people. The Church, after all, has a readily waived statute of limitations for these crimes.

The Church remains committed to eradicating sexual abuse “root and branch”, the archbishop said. But, it must be acknowledged, she is still finding its feet in these matters. After many years of trying to resolve the situation internally, the Church in the Netherlands and all over the world is learning to work publicly and with other institutions. The Vatican seems to be starting to coordinate and direct how individual bishops’ conferences and religious congregations work for and with victims and against sexual abuse, for example.

Back home, the archbishop revealed that a special contact group between bishops and victims will be created to further communication between the two. We’ve seen the first steps in Archbishop Eijk’s meeting with victims on Sunday. An important role in this group will be played by Rotterdam’s Bishop Hans van den Hende (right), who is a good choice for such sensitive and pastoral work.

One thought on “The archbishop in parliament”