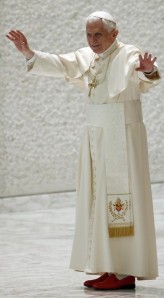 During his general audience, two days ago, Pope Benedict XVI spoke about the Week of Prayer for Christian Unity, a topic whose goal sometimes seems almost impossible to achieve by mere mortals. But, the pope says, it is not in our hands, but “in the hands of the Risen Christ”. Which, obviously does not mean we need not do anything to work towards full unity between all Christians. Quoting Blessed Pope John Paul II’s Ut unum sint, the Holy Father shows that ecumenism and the road to full communion lies “at the center of the Church’s life and work”.

If we fail to recognise this, we may gather from these words, the damage that the division among Christians does to the proclamation of the Gospel of the Lord will remain.

Go read my translation of the entire address.