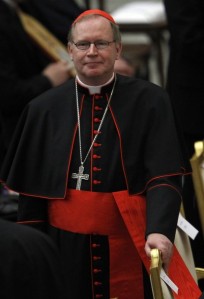 In a letter dated to the fifth of March, Cardinal Wim Eijk has informed the priests, deacon, pastoral workers and others with a mission from the archbishop of Utrecht that he will be focussing more closely on how the liturgy, especially that of the Eucharist, is celebrated in the Archdiocese of Utrecht. It is a letter with a rather harsh tone, as the passage quoted below illustrates. One can debate if such a tone is justified, but the cardinal does address a serious concern: a worthy celebration of the Eucharist in union with the world Church is not a given in many Dutch parishes. When he was bishop of Groningen-Leeuwarden, Cardinal Eijk saw himself faced with the same problem, and it seems clear that he intends to use the same tried and tested method that worked in the past.

“Out of my office and responsibility as archbishop of Utrecht I [..] urge all priests, deacons, pastoral workers and spiritual caregivers who are working with a pastoral mission in the Archdiocese of Utrecht to know and carefully follow the liturgical regulations which are in force for the Holy Eucharist as well as for other liturgical celebrations (as established in the Code of Canon Law, the General Instruction for the Roman Missal and the Instruction Redemptionis Sacramentum).

Should it happen that in the future I will have to conclude that the liturgical regulations which are in force for the Holy Eucharist and/or other liturgical celebrations have once again been violated, I will not hesitate to impose, or have imposed, canonical sanctions on those responsible, not excluding retraction of their pastoral mission.

I very much hope that it will not have to come to this and that you, from your various offices and duties, will all continue to contribute loyally to a dignified and correct celebration of the liturgy, especially the Holy Eucharist, in our archdiocese.”

Will hackles be raised? Will people feel attacked and will there be protests? No doubt. But the fact remains that there is a major problem in how too many people treat the liturgy of the Church: as outdated rules that are out of touch with modern faithful, a burden on the people’s spirituality. But where the liturgy of the Church is given a chance, spirituality becomes a mature faith.

4 thoughts on “Giving no quarter: Cardinal Eijk on the offensive”