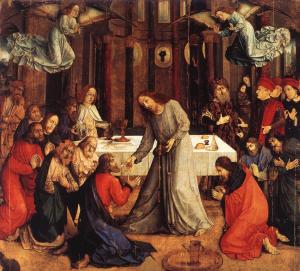 And so, as ever surprisingly fast, we rush towards the end of Lent, towards the eternal salvific sacrifice of Christ on the Cross. Yesterday, we learned of the betrayal of Judas, and today, on Maundy or Holy Thursday, we commemorate the institution of the Eucharist at the Last Supper that Jesus shared with His disciples.

Before He offered Himself on the Cross, Jesus eternally gave Himself to us under the appearance of bread and wine* St. Paul, in his first Letter to the Corinthians (11:23-26), writes:

For the tradition I received from the Lord and also handed on to you is that on the night he was betrayed, the Lord Jesus took some bread, and after he had given thanks, he broke it, and he said, ‘This is my body, which is for you; do this in remembrance of me.’
And in the same way, with the cup after supper, saying, ‘This cup is the new covenant in my blood. Whenever you drink it, do this as a memorial of me.’
Whenever you eat this bread, then, and drink this cup, you are proclaiming the Lord’s death until he comes.

We’ll hear this passage as the second reading at today’s evening Mass, when the priest washes the feet of twelve faithful, in imitation of Christ washing the feet of His disciples. At the end of Mass, Jesus, in the form of bread and wine, secludes Himself in the altar of repose, the altar is stripped and we enter that final night of His life, alone in prayer while His disciples failed to stay awake with Him.

As He has promised, Jesus is with us every day, and especially so in the Eucharist. We are beings of flesh and blood, as well as spirit, and our nourishment reflects that. The Word that is Christ feeds our heads and hearts, and in the Eucharist He feeds us physically. But unlike a regular meal, the food does not become part of us: we become part of it, of Him.

Art credit: “The institution of the Eucharist”, by Joos van Wassenhove, 1473-75

*An enlightening text to consider in this context is John 6: 48-58