Yesterday evening I attended an ordination. Although it wasn’t a person being ordained, and it wasn’t actually called an ordination, the Mass had the basic structure of a priestly ordination. The bishop did the honours, we prayed the Litany of All Saints, there was anointing and a first Mass. What ‘got ‘ordained’ then? A new people’s altar. 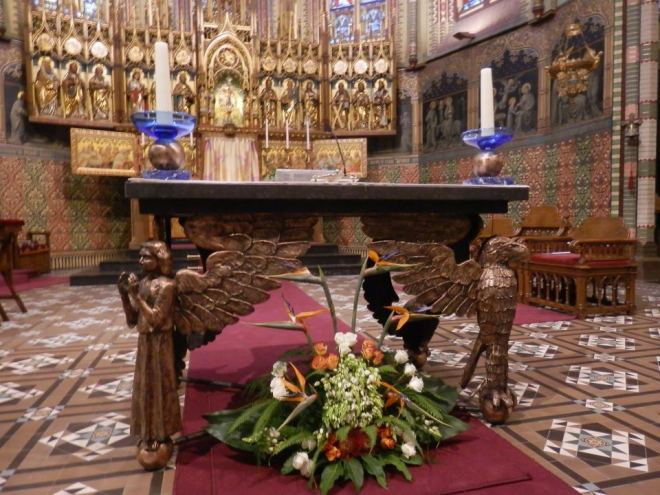 Together with a new ambo, it was a gift from the parish council to the parish on the occasion of the 125th anniversary of the consecration of our cathedral, St. Joseph’s. The new altar replaces a fairly simple but heavy wooden table. This one is smaller and therefore makes the entire sanctuary appear bigger. With its flat stone surface and legs crafted into the symbols of the four evangelists, it matches the rest of the sanctuary well. The only distractions are the two candle holders. Blue appears nowhere else in the sanctuary, and although the candles are nice and big, there should be six of them. A minor complaint about an otherwise nice altar.

The smaller size of the new altar means that the number of concelebrants is practically limited. In yesterday’s Mass, the bishop concelebrated with his vicar general and the cathedral administrator, and other members of the cathedral chapter were attending in choir. It certainly makes the sanctuary look less crowded.

Why such an elaborate ceremony for what is, essentially, a piece of furniture, though? It shouldn’t be a surprise that in a Church, nothing is just a piece of furniture, especially when it’s in the sanctuary. That altar, in fact, is one of the most important elements in a church, perhaps second only to the tabernacle. It is where Christ becomes present for us, where His sacrifice and resurrection are made present again for us, from where we receive Him in communion. Everything we do, have and know in our faith comes from there. That is why a new altar needs to be changed from just a piece of furniture into a sacramental. It needs to be prepare for its holy service.

That is why it is anointed., which may be seen in the photo below: Bishop de Korte is anointing the surface of the altar. That is why we pray for the intercession of all the saints, just as we do when a man is ordained to the priesthood. Our prayers will aid in receiving and benefitting from what we receive from the altar. In the surface of the altar, relics are embedded, as an altar exists in connection with the graves of the martyrs and, eventually, with the altars that Abel, Noah, Abraham and other Old Testament Fathers erected. The consecration of an altar is also a public act, since the use of the altar is public: it will allow the community of faithful to receive the Eucharist, and thus be united in faith.

The altar is no longer just a piece of furniture. It is a tool towards our salvation. 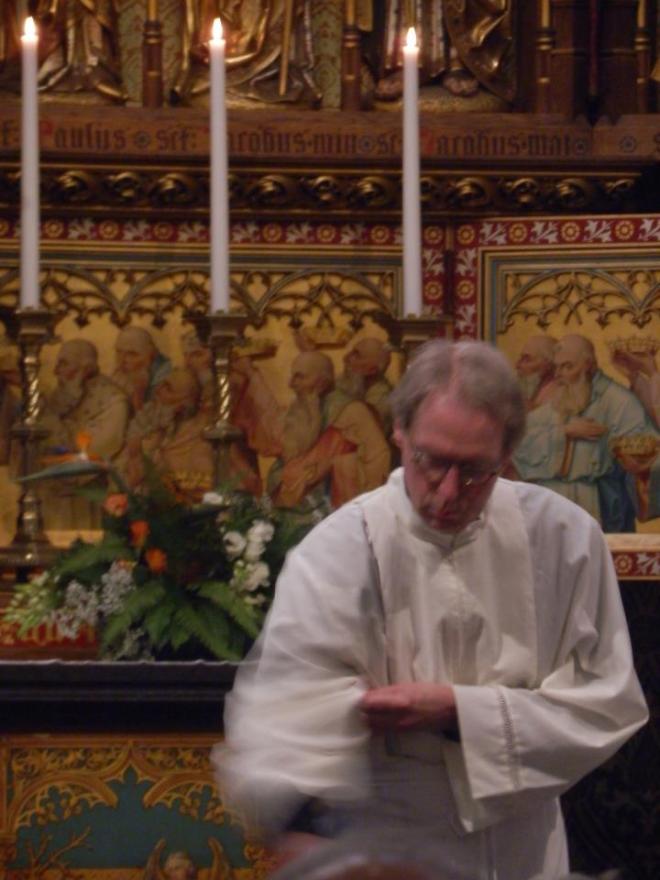 3 thoughts on “A new altar for Saint Joseph”