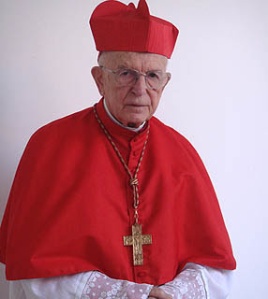 Going by the date of creation, Eugênio de Araújo Sales was the most senior cardinal in the College until his death last night. At the age of 91 the former archbishop of Rio de Janeiro came to the end of a life marked by service to the Church in his native Brazil, and the numbers of that life are certainly impressive. A priest for more than 68 years, a bishop for almost 58, and a cardinal for a little over 43 years…

Eugênio de Araújo Sales was born into a wealthy family in the northeastern Brazilian state of Rio Grande do Norte. His father was a judge, and young Eugênio was able to receive a good education. At 15, he entered the minor seminary in Natal, the state capital, and a year later he moved to the major seminary in Fortaleza. Completing his studies in 1943, he was ordained a priest for the Diocese of Natal, which had been created only 34 years earlier. He devoted his time to pastoral work, but somehow came to the attention of the higher powers in the diocese that in 1952 had become an archdiocese. In 1954, Pope Pius XII appointed him as auxiliary bishop of Natal, with the titular see of Thibica (a see today held, incidentally, by the secretary of the Congregation for the Doctrine of the Faith, Archbishop Luis Ladaria Ferrer).

In 1962, although Archbishop Marcolino de Souza Dantas did not retire as archbishop of Natal, Bishop de Araújo Sales was appointed as apostolic administrator sede plena, indicating that the archbishop was, in some way, incapacitated or unable to run the archdiocese. Two years later, on 9 July 1964, Bishop de Araújo Sales was transferred to the Archdiocese of São Salvador de Bahia, one of Brazil’s oldest and most prestigious sees, once more as Apostolic Administrator sede plena. In that same period, he attended all sessions of the Second Vatican Council. In October of 1968 his appointment as archbishop of São Salvador de Bahia followed. Befitting his new function, Archbishop de Araújo Sales was created a cardinal in the following April, at the same consistory were Dutch Cardinal Johannes Willebrands was created. His cardinal title was San Gregorio XII. He was the first cardinal protector of that church.

The cardinal’s time in São Salvador de Bahia turned out to be fairly short, as he was moved southward in April of 1971, to the Archdiocese of São Sebastião do Rio de Janeiro. And that is where he would stay until his retirement in 2001. He was also the bishop for the faithful of the Eastern Rites in Brazil. Recently, evidence began to surface that, in Rio, Cardinal de Araújo Sales was strongly opposed to the  human right violations committed under the military regime of the time. Later, he also became a steadfast voice for the protection of Catholic morals in daily life in the city and all of Brazil.

Aside from his normal work as shepherd of the faithful in Rio, Cardinal de Araújo Sales participated in several major international conferences and assemblies in the Americas and in Rome. He participated in the conclaves that elected Popes John Paul I and Blessed John Paul II, and represented the latter at several major celebrations in Brazil and Portugal. Followed the death of the Blessed Pope, Cardinal de Araújo Sales was one of the nine prelates offering a funeral Mass for the deceased pontiff.

Cardinal de Araújo Sales continued with pastoral activities well after his retirement. At the age of 90 he still regularly offered Mass in a parish church in Ipanema and maintained an office next door to it. He also contributed a weekly column on faith and morality to a local newspaper until the current archbishop of Rio, Orani João Tempesta, took over from him (upon the cardinal’s own suggestion) in April of 2011.

With the death of the cardinal, the College of Cardinals now numbers 208, 121 of whom are electors.