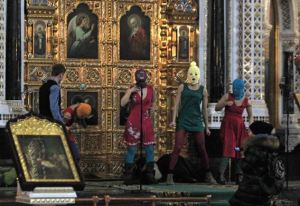 In certain circles, many people have spoken out against the conviction of Russian punk group Pussy Riot, who staged a protest against that country’s President Putin in Moscow’s Christ the Saviour Cathedral. They are punished, many on the left side of the political spectrum say, for speaking out against Putin, and therefore their conviction is an example political violence, of curbing free speech.

But, just like the group’s protest was far more than a political protest, the consequences are also. Father Ray Blake, for example, considers the site of the protest and its importance for the Russian nation. He writes (emphasis mine):

“For Russian believers this Cathedral symbolises the very heart of Christian Russia, reborn after the murder of countless of believers and the wholesale destruction of religion in Russia[…]. The demonstration against Putin was one thing but the blasphemy and mockery of religion in the Cathedral was a reminder for believers of the type of thing organised by the persecutors within living memory, it was spitting in the face of the holy Russia.
Can the fatuous western “supporters” of Pussy Riot understand the nature of their demonstration?

And the location, as well as the despicable language and behaviour displayed by the group make a difference. This was not merely a matter of political commentary. It was a blasphemous desecration, an insult to many believers and a spitting in the face to all of Russia. Pussy Riot, as many from whom free speech is a holy grail, consider their own perceived rights an opinions to trump the feelings, rights and opinions of everyone else. In fact, it’s individualism gone crazy.

Is two years in prison harsh? Perhaps (the Russian Orthodox Church seems to think so, as it has appealed for mercy and freedom for the group). Was some form of punishment in order? Most certainly. Pussy Riot are not the victims here.