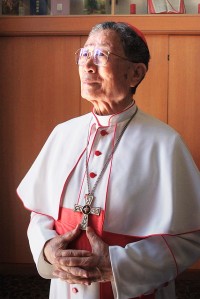 After six years battling cancer, Paul Cardinal Shan Kuo-Hsi passed away yesterday. The former archbishop of Kaohsiung’s death leaves 207 members of the College of Cardinals, of whom 119 are electors.

Born in China in December of 1932, Paul Shan Kuo-Hsi entered the Jesuit order, but fled the country when the Communists took over. In 1955 he was ordained to the priesthood in the Philippines, where he worked as director of the Chinese Section of Sacred Heart School in Cebu City. Studying for a doctorate in spiritual theology at Rome’s Gregorian University, Father Shan too a position at the Jesuit novitiate in Thuduc, Vietnam from 1961 to 1963. He went to Taiwan after taking his final vows in 1963, where he was appointment as master of novices and later as rector of a high school. In 1980, he was consecrated and installed as the third bishop of Hwalien, also in Taiwan. During that time, in 1987, he was chosen to chair the Chinese Regional Bishops’ Conference, a position he would until 2006. In th meantime, in 1991, he was elected as bishop of Kaohsiung. He would remain there until his retirement in 2006. In 1998, he became for a while the only Chinese cardinal when Blessed Pope John Paul II appointed him as cardinal-priest of San Crisogono. The cardinal revealed his having lung cancer shortly after his 2006 retirement.

Cardinal Shan was especially committed to interreligious dialogue, perhaps not surprising in a country where less than 5% of the population is Christian. As bishop of Kaohsiung he worked towards formation of the laity and local priests. In the Curia, Cardinal Shan was a member of the Pontifical Council for Social Communications, the Congregation for the Evangelisation of Peoples, the Pontifical Council for Interreligious Dialogue and the Special Council for Asia of the General Secretariat of the Synod of Bishops