The Creed is the faith that we confess at every Mass, and it is therefore a summary of what we believe, the truths we hold as such – truths. These truths not only identify what we believe in, but also who we are. They form our Catholic identity.

On the road towards the Year Of Faith, I want to take a look at the Nicene Creed, line by line, to see what it tells us about the truth of being Catholic Christians.

born of the Father before all ages. God from God, Light from Light,true God from true God, begotten, not made, consubstantial with the Father.

We continue to profess the identity of Christ, and more specifically, His relationship with God the Father. The first line in this section once again repeats that the Son came forth from the Father alone, as we found out in the last post in this series. The following lines seem to want to emphasise that, and in doing so they also underline that the Son is God, just like the Father. Both are divine persons of one being. There are no levels of Godhood, the one is not more or less God than the other. God from God, even true God from true God. 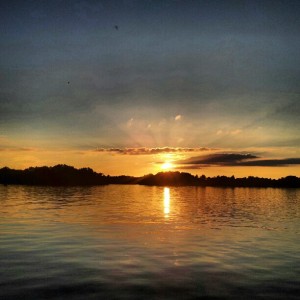 The Creed also presents us with a handy simile: The reflection of the sun on water is no less light than the sunlight directly hitting our eye. Christ is no less God than the Father. They are both God, just as the reflected light and the direct sunlight are both light. The comparison doesn’t completely fly, but it’s a handy enough introductory one.

Christ came forth, was begotten, from the Father. He is pertinently not part of Creation, although He did dwell fully in it. God the Father did not create His Son like He created Adam. This indicates a difference, a hierarchy. By His entire being, Christ is of another level than us men. It’s hard to imagine otherwise, since we already know that God exists outside of Creation, and since Christ is God…

Considered a difficult word by some, ‘consubstantial’ offers a glimpse of the Father-Son relationship within the Trinity (of which we’ll encounter the third person later). A literal translation of this word, which is derived from Latin consubstantialis, would be ‘of the same substance’. In this case ‘substance’ indicates matter but also being, and that is the important element here. God the Father and God the Son are distinct beings, but they are of one being, one substance.

This is not the place to delve in the doctrine of the Trinity, so let’s leave it at this. We confess that Jesus is God, in no way less so than God the Father, and He is forever (“before all ages”) begotten of the Father.