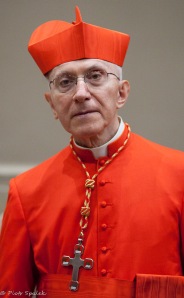 Erstwhile diplomat and retired Major Penitentiary Fortunato Cardinal Baldelli passed away yesterday at the age of 77. The College of Cardinals now numbers 205, of whom 116 are electors.

Fortunato Baldelli was born in 1935, as one of eight children in the mountains of Perugia in Italy. He entered seminary in Assisi in 1947 and was able to continue his priestly formation despite the death of his parents, thanks to his brother priests and Bishop Giuseppe Nicolini of Assisi. It did take until 1961 before he was ordained for the Diocese of Assisi-Nocera Umbra-Gualdo Tadino. In those 14 years he studied at the Pontifical Lateran University in Rome, earning a licentiate in theology, and at the Pontifical Ecclesiastical Academy, where he studied diplomacy.

Following his ordination, Father Baldelli became vice-rector of Assisi’s minor seminary. In 1966, he earned a doctorate in canon law and entered the Holy See’s diplomatic service. After assignments in Cuba and Egypt, Fr. Baldelli returned to Rome, where he worked at the Secretariat of State and later at the Council for the Public Affairs of the Church. In 1979 he was tasked to be a special envoy, with the duties of a permanent observer, at the Council of Europe in Strasbourg.

In 1983, Blessed Pope John Paul II consecrated Fr. Baldelli as titular archbishop of Bevagna, and sent him to Angola as apostolic delegate. In 1985 he also became Apostolic pro-Nuncio to São Tomé and Principe. In 1991, he left Africa to become Nuncio in the Dominican Republic, where he was succeeded in 1994 by one Archbishop Bacqué, who would later become Nuncio to the Netherlands. From 1994 to 1999, Archbishop Baldelli was Nuncio in Peru, and after that in France. In 2009 he returned to Rome, and was appointed as Major Penitentiary of the Apostolic penitentiary.

Archbishop Baldelli was created a cardinal in the consistory of 2010, and became cardinal deacon of Sant’Anselmo all’Aventino (incidentally the seat of the Primate of the Benedictine Order, Notker Wolf, re-elected as such today). In January of this year, Cardinal Baldelli retired as Major Penitentiary.

Cardinal Baldelli was a member of the Secretariat of State and the Congregation for the Causes of the Saints.