By 2016, the small religious broadcasters – including Catholic RKK – are to cease their work, as the government has decided to pull the financial plug on them. Originally preserved as a reflection of the perceived variety desired by the television audience in the Netherlands, they are now seen as an unwanted religious presence on state-funded television, since religion is something that belongs “behind the front door”. That is the general tone of the comments I read about this development.

The decision to stop financing these broadcasters – which also include Protestants, Jews, Muslims, Hindus, Buddhists and humanists in addition to the RKK – is remarkable in part because the government promised to maintain their licence to broadcast. Now that the financial plug is to be pulled, having a licence is really not much use.

An easy answer would seem to be to find other financers, but the problem is that these are hard to find. A logical financer for the RKK would be the Catholic Church in the Netherlands. But in a time when even they are cutting communication expenses – whatever the wisdom of that may be – they are in no place to cover the costs needed.

But the government’s decision points to an even more serious issue: that faith and all its expressions is not something that should be shown on state television. By singling out the religious broadcasters the governments is basically curtailing the freedom of expression of people of faith and their institutions. It is not a matter of merely cutting costs (that would just as easily be achieved by cutting one of the three public television channels, for example), but a conscious decision to single out a specific group of broadcasters with a clear religious identity. This is no exaggeration. The options of saving money now spent on television are myriad. The decision to remove the religious sound from the television package is a clear signal: “Faith is not something we need or want in our society” (for television reflects society, or at least influences that society, and increasingly for the worse).

Some might ask if it really is such a bad thing, for what do the religious broadcasters contribute? Yes, it is true that individually they do not have many hours available to broadcast programs, and that as a result of that not many people watch them. But these are merely numbers, and numbers considered in comparison to the big boys: the big game shows, the news, the soap series, sports… When numbers become reasons for or against continued existence, we should start to worry. By that I don’t mean that numbers mean nothing. If a broadcaster is evidently superfluous, one could ask if its continued existence would do any good. That is not the case here. The Catholic message is not superfluous, the presence of a televised Mass is never pointless. As Catholics in the Netherlands we need the Catholic presence on television. Lofty as social media are, the Dutch consumer generally still turns to his TV for instant information.

In its choice to single out the religious broadcasters, the state has decided what can and can not be shown on television, and thus becomes totalitarian. It’s not a cost-cutting measure, but the pursuit of an agenda.

Search queries on my blog sometimes give an indication that something has happened that hasn’t come to my attention. So was it today as well, as a rise in searches for Bishop Wilhelmus Joannes Demarteau was explained today by the news of his passing.

95-year-old Bishop Demarteau hailed from the Diocese of Roermond, but became a priest and bishop of the mission in Indonesia. Ordained a priest for the Congregation of Missionaries of the Holy Family in 1941, Wilhelmus Demarteau left for Indonesia after his first Mass in his hometown, and was appointed as Vicar Apostolic of Banjarmasin, in the south of the Indonesian island of Kalimantan, in 1954, at the age of 36. A few months later, he was consecrated as bishop.  As Banjarmasin became a diocese in 1961, Bishop Demarteau became its first bishop, until his retirement in 1983. He remained in his former diocese after his retirement and will be buried there as well. His native Diocese of Roermond will remember his passing in a special memorial at the end of January.

Bishop Demarteau was one of the last living bishops appointed by Pope Pius XII and the second oldest bishop of Dutch decent. Only Bishop Andreas Sol, emeritus of Amboina, also in Indonesia, is older. 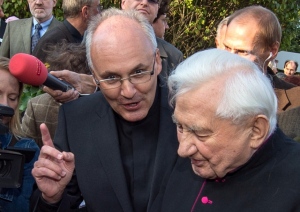 As the rumours had it with an increasing level of certainty culminating in a confirmation, a new bishop for the Bavarian Diocese of Regensburg is announced today, five months after the previous ordinary, Gerhard Müller, was called to Rome to head the Congregation for the Doctrine of the Faith. The new bishop is Rudolf Voderholzer, a 53-year-old theologian who was a close collaborator of now-Archbishop Müller and can therefore be considered to belong to the ‘school of Ratzinger’.

Bishop-elect Voderholzer (pictured above with Msgr. Georg Ratzinger, the pope’s brother) studied under Müller and worked as his assistant while the latter taught at the Ludwig Maximilians University in Munich. Since 2005 he taught Dogmatics and Dogmatic History in Trier and he has led the Benedict XVI Institute, established by Müller to collect and edit the writings of the pope, since 2008.

Bishop-elect Voderholzer was considered a likely successor to Müller, although nothing was certain in a Germany that had four vacant dioceses until Regensburg was filled today.

The 78th bishop of Regensburg was ordained to the priesthood in 1987 by Munich’s Cardinal Wetter. He worked as a parish priest until he earned in decree in Dogmatics under then-Professor Müller. Next to his academic career, he continued working in the parishes near Trier.

In the words of Fr. Wilhelm Gegenfurtner, who led the vacant diocese as Apostolic Administrator in the past five months:

“We are grateful for his Yes, by which he agreed to the decision of the Holy Father. The time of his consecration to bishop and the acceptance of his office will be announced in the coming days. But I already invite all the priests, deacons, members of religious orders and lay people, the ecclesial institutes and associations of the entire diocese to celebrate this festive day with us. The celebration of the bishop’s consecration will be a witness of th shared faith in Christ the Eternal High Priest, a confession of the unity of the diocese and a sign of the loyalty and unity with the new chief shepherd.”