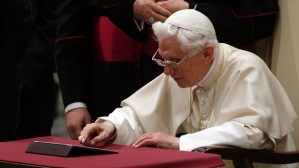 The Holy See today released Pope Benedict’s Message for the 47th World Communications Day, which deals with the topic of social networks, This is in itself a natural progression from the topics of previous messages, which the Holy Father all devoted to what he called the “digital continent”, the Internet, which is an area to be evangelised, just like any physical part of the world.

As ever, the Communications Day Message is eagerly expected by many Catholics who are active in social media, and I am no exception. The message is not long (only some 1,600 words), so my Dutch translation is already up on the Translations page.

Pope Benedict sees the social networks, such as Twitter and Facebook as “a new “agora”, an open public square in which people share ideas, information and opinions, and in which new relationships and forms of community can come into being.” This potent mixture can lead to true communication, friendship, communion, but that requires authenticity, because we don’t just share ideas and information, “but ultimately our very selves”.

This shows us that the pope takes social networks very seriously. It’s not just something on the side, to be used when we need it for work or entertainment: “The digital environment is not a parallel or purely virtual world, but is part of the daily experience of many people, especially the young.”

The Holy Father calls us to be authentic Christians on the social networks, to be who we are. “It is natural for those who have faith to desire to share it, respectfully and tactfully, with those they meet in the digital forum.” This indicates how we should express ourselves online:

“At times the gentle voice of reason can be overwhelmed by the din of excessive information and it fails to attract attention which is given instead to those who express themselves in a more persuasive manner. The social media thus need the commitment of all who are conscious of the value of dialogue, reasoned debate and logical argumentation; of people who strive to cultivate forms of discourse and expression which appeal to the noblest aspirations of those engaged in the communication process. Dialogue and debate can also flourish and grow when we converse with and take seriously people whose ideas are different from our own. “Given the reality of cultural diversity, people need not only to accept the existence of the culture of others, but also to aspire to be enriched by it and to offer to it whatever they possess that is good, true and beautiful” (Address at the Meeting with the World of Culture, Bélem, Lisbon, 12 May 2010).”

A final important point in the message is that social networks can also help those faithful who are, for some reason or other, rather isolated: “social networks can reinforce their sense of real unity with the worldwide community of believers. The networks facilitate the sharing of spiritual and liturgical resources, helping people to pray with a greater sense of closeness to those who share the same faith.”