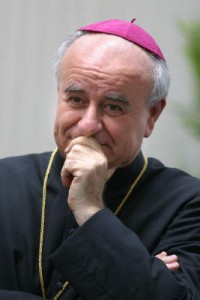 Twice today did unexpected statements from Church leaders make headlines, but not necessarily for the right reasons. Cologne’s Cardinal Meisner was deceived into stating that the morning after pill would be allowable in some cases, or so a leading physician claimed. And the Pontifical Council for the Family’s Archbishop Vincenzo Paglia (pictured) spoke against discrimination of homosexuals and the rights of those who live together in other ways that marriage, which was picked up by some as if it was some major change in Church teaching. Archbishop Paglia also stated that his words were manipulated.

While many media undoubtedly have an agenda in reporting on the Church and what she teaches, I think this also points towards a problem that still exists in Church communication, both on the global and the local levels: We simply are not clear enough.

Archbishop Paglia’s situation certainly points in that direction, while Cardinal Meisner’s is more a case of acting on incorrect information. In both cases, however, we may speak of communication gone wrong. Whether the miscommunication is based on misinformation or a lack of clarity is secondary.

Don’t get me wrong, I applaud the cardinal and the archbishop for their efforts to clarify Catholic teaching. I simply that more care is in order when such efforts are undertaken. Ours is a message that is quite specific and not always easily grasped in a headline or quote. If we want to share the Good News, we must not only take it into account, but also our audience, and that audience is one used to short sound bytes and catchy headlines. Careful academic expositions about some sensitive subject (such as contraception, sexuality or marriage) have their place and audience, but do not always, or rather rarely, translate well into the media

Instead of limiting ourselves to lamenting the state of modern media, we must make use of it. It is a tool that we too can, and should, use. And that use includes guarding ourselves against possible misinterpretation, having ways to efficiently correct media and audience if necessary, and having the knowledge available to communicate what is true.

One thought on “Manipulation or misunderstanding?”