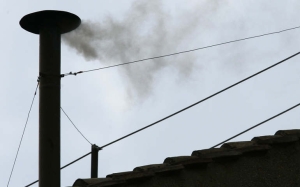 Since no one but the cardinal electors and about 90 people who work in support of the ongoing conclave will have any sense of what goes on during the sessions in the Sistine Chapel, we depend on the chimney atop the chapel and the bells of St. Peter’s Basilica. So at what times should we pay special attention?

Today, the first smoke will emanate sometime between 7 and 7:30pm (All the times I list are the local times in Rome, which is in the GMT+1 time zone). This will undoubtedly be black, as it nigh-impossible for a Pope to be elected in the very first ballot. No cardinal can as yet expect 77 votes, I would think.

Tomorrow, and the remaining days of the conclave, will see four rounds of voting. If the first round yields a positive result, we’ll see white smoke at around 10:30 in the morning. Regardless of the result of the second ballot, we will see smoke between 11:30 and noon: black if there is no Pope, white if there is. For the evening the times will be 6pm if there is a Pope and between 6:30 and 7, regardless of the result.

In short, keep those eyes peeled on the chimney, via the Vatican video player, for example, at 10:30am, between 11:30 and noon, at 6pm and between 6:30 and 7pm. Smoke is guaranteed in the second and fourth time slots.