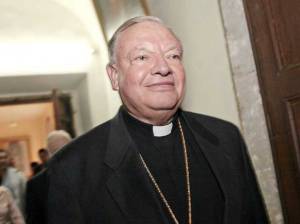 A force to be reckoned with for those with differing ideas, Juan Cardinal Sandoval Íñiguez marks his 80th birthday today, leaving 113 electors in a College of Cardinals numbering 206.

The Mexican prelate was born as the oldest of 12 children (of whom nine survived into adulthood). As a 12-year-old, young Juan entered seminary in 1945 and eventually found himself in Rome. There, he was ordained a priest in 1957, and he also earned a degree in philosophy and a doctorate in dogmatic theology from the Pontifical Gregorian University.

Returning to Mexico in 1961, Fr. Sandoval started a career at the seminary of Guadalajara, first as spiritual director, and later as teacher, prefect and eventually, in 1980, as rector. He also served as a member of the Presbyteral Council and Clergy commission of the Archdiocese of Guadalajara.

In 1988, he was appointed as Coadjutor Bishop of Ciudad Juárez, serving with Bishop Manuel Talamás Camandari, who retired in 1992. Bishop Sandoval then became ordinary until 1994, which means he spent more time in Ciudad Juárez as coadjutor than as ordinary.

In 1993, Archbishop Juan Jesús Posadas Ocampo of Guadalajara had been murdered in either a drug gang shootout or a politically motivated assassination, and Bishop Sandoval was appointed to succeed him. In the same year as this appointment, Archbishop Sandoval was created a cardinal, with the title church of Nostra Signora di Guadalupe e San Filippo Martire.

In Mexico, Cardinal Sandoval often appeared on television, teaching the catechism on a national Catholic network. He also caused ripples in the political scene, being the subject of an investigation into alleged financial misdemeanors and being charged with defamation of character when he accused a politician of accepting money for supporting the pro-gay marriage agenda.

Cardinal Sandoval was rarely know for being subtle, ruffling the feathers of Protestants, women and homosexuals while pointing out serious problems relating to these groups. And sometimes he simply said things he shouldn’t have said.