After many months of speculation and a few days of ever stronger rumours, it was finally confirmed yesterday. Daily newspaper Trouw enquired with the bishops and later that same day an official confirmation was released via the Church province: yes, after nine years, the Dutch bishops are making their ad limina visit to Rome.

The details: Scheduled for five days, the ad limina visit will take place from 2 to 7 December. The bishops will be received in audience by Pope Francis on 5 December. Before and after that there will be meetings with the various offices of the Curia. Every bishops will present a report about the situation in their diocese. These reports will remain confidential. A report on the Church in the Netherlands, compiled by the bishops’ conference as a whole, will be released to the public on the first day of the ad limina.

The reason for the long delay (ad limina visits should theoretically be made very five years, although it is usually longer; nine years, however, is exceptional) is given by the bishops as the backlog created by the ailing health and death of Blessed Pope John Paul II, the conclave of 2005, the time that Pope Benedict XVI needed to get started as Pope, the slower rate of visits in his later years as Holy Father, the conclave of this year and the first months of the papacy of Pope Francis.

Of the 12 or 13 bishops that make up the conference (it is yet unclear of Bishop Jan van Burgsteden is going: he is retired, but retains some functions within the conference), Six wil be making their first ad limina. Of these, two bishops are ordinaries and four auxilairies. They are Bishops Jan Hendriks, Theodorus Hoogenboom, Jan Liesen, Rob Mutsaerts, Hans van den Hende and Herman Woorts. Of the seven who are making their second ad limina, three are doing so in other functions: Cardinal Eijk was Bishop of Groningen and is now Archbishop of Utrecht (and cardinal), Bishop de Korte was Auxiliary of Utrecht and is now Bishop of Groningen-Leeuwarden, and Bishop van Burgsteden was Auxiliary of Haarlem is now Auxiliary Bishop emeritus of Haarlem-Amsterdam.

Finally, some who were there in 2004 are now absent: Cardinal Simonis has retired as Archbishop of Utrecht; Bishop Jan de Kok as Auxiliary Bishop of the same; Bishop Ad van Luyn as Bishop of Rotterdam; and Bishop Tiny Muskens as Bishop of Breda (he has passed away since). 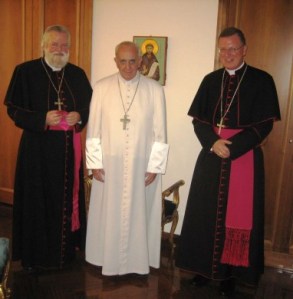 Some of the bishops, such as Bishops Punt and Hendriks last month, as pictured at left, have met Pope Francis before, while others haven’t. Cardinal Eijk, who is leading the delegation as president of the bishop’s conference commented: “I have met Pope Francis several times, also before he became Pope. For me it is a very special occasion to now speak more closely with him about the developments in the archdiocese and our Church province. I am really looking forward to it.”

One thought on “Back to the threshold, bishops going on ad limina”