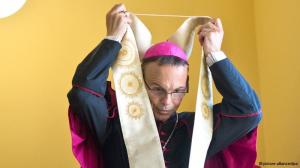 Together with the events of earlier this week, in which Bishop Franz-Peter Tebartz-van Elst had his resignation accepted and Bishop Manfred Grothe was appointed as Apostolic Administrator of the now vacant diocese, the bishop emeritus offers what may be hoped is the closing act of this whole ugly affair. Following a morning audience with Pope Francis, Bishop Tebartz-van Elst comes with a statement in which he admits that he made mistakes and asks for forgiveness from all who were affected by them. Here is my translation:

“During my time as Bishop of Limburg the impression arose among many Catholics and in public that I neglected the service to the diocese and to the unity of the Church by putting my own objectives and interests first and onesidedly enforcing them.

With the knowledge of today I acknowledge that I have made mistakes. Even though I did not make them on purpose, they did destroy trust. I ask for forgiveness all who have suffered or still suffer under my  negligence.

In the face of the serious allegations and the subsequent loss of trust I placed the decision about my future in the hands of Holy Father as early as October of 2013. This week he released me from the responsibility for the Diocese of Limburg, to entrust me with a new task in due time. This the Holy Father also emphasised to me personally in a cordial fraternal meeting this morning (28 March 2014).

I consider this decision to be an opportunity for a new start: not only for the Diocese of Limburg, but also for me. In this spirit I ask all of you to see my comments of 11 March 2014 to the Congregation about the report, which was published in the past few days, as a turning point – and not as the start of a new argument.

I hope that it will be possible to understand from a distance, beyond mutual recriminations and injury, what has happened and to gain insights that can lead to a reconciliation. I will pray for that, use all my strength and also ask for prayer.”

In my opinion, this is all we could and should have hoped for to come out of the private meeting between the bishop and the Holy Father.The facts are clear, and no amount of debating will change them. It is good for the bishops to publically acknowledge that, and although his comments against many of the conclusions from the bishops’ report were unwise, at least this soon, we should indeed accept them as a turning point. In an interview yesterday, Bishop Grothe said as much, when he expressed his total lack of surprise at Bishop Tebartz-van Elst’s comments. From the very start of the investigation, he explained, the bishop was free to comment, even expected to do so.

Whatever the future may hold for the Diocese of Limburg and Bishop Franz-Peter, it is there that we should now look: ahead, not behind.

One thought on “Forgiveness, prayer and reconciliation – Bishop Tebartz-van Elst looks to the future”