Bishop Johan Bonny of Antwerp considers the Christian faith’s authenticity and the physicality of the Resurrection. 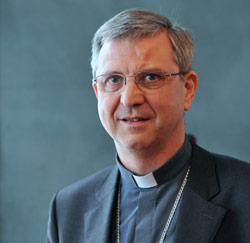 Christians believe that God’s Word became “man” in Jesus. In the Greek and Latin it actually says that God Word became “flesh”, or took on bodily form, in Jesus. God did not limit Himself to words and promises. He did not get stuck in conversations with His people. Undoubtedly some wished He did: the continuation of a fiery discussion with God, with arguments for and against. God did not walk into that trap. He became man in Jesus, a man of flesh and blood, who embodied what He said. People looked at Jesus and saw that He was sincere: towards them and towards God.

Jesus paid a great price for that. When people could no longer stand His words, He had to go. It wasn’t so much His message that had to be fought or denied. It was God’s “becoming man” in flesh and blood that had to be blocked, if need be with brutal violence. That which made Jesus bodily present, that had to end. Silence fell around Jesus on Good Friday. Nothing had to be said any longer. His dead body on the cross surpassed the words He could have said. By the way, there was no one who wanted to hear them anymore. His body was laid in the tomb.

At Easter we celebrate the Resurrection of Jesus from the tomb. In the Creed we will solemnly sing that we believe in “the Resurrection of the body”. That is indeed what Easter is about: about our faith in the resurrection of the body. Jesus is risen completely and forever. Everything in Him has been brought to completion and glory by the Father. Nothing was left behind, least of all the body with which He had confirmed His words and completed His sacrifice. After Easter Jesus carried in His hands and sides the scars from the Cross. Thomas could put his fingers in them. That completed the wonder and joy of the disciples. In Jesus, the Father most certainly made a man of flesh and blood rise from death!

The power of the Resurrection does not hover like  cloud above the earth. It enters this world and our loves, into the core of our humanity. And especially: it enters the language of the body. Places where the Resurrection breaks through have everything to do with the proof of the pudding, which has to come from the body. Where strangers shake hands, where a volunteer pushes a wheelchair, where a child is born, where an ill person struggles with pain, where partners remain loyal, where the gun is put down, where a kiss is genuine, where food aid is being distributed, where gossip falls silent, where solidarity can come from gut feeling: that is where the power of the Resurrection breaks through. Where the body can put the signature of God, that is where the world has a future.

I wholeheartedly wish you a happy Easter!”