On this feast of Our Lady of Sorrows, a photo of the shrine she is the patron of: Our Lady of the Garden Enclosed in Warfhuizen. 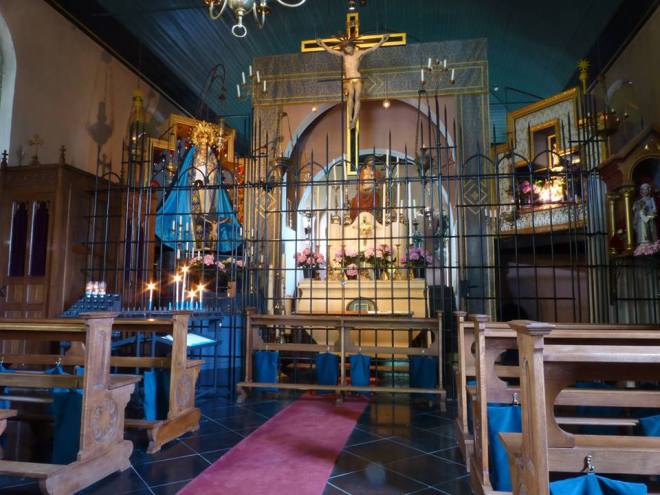 The chapel recently gained a new addition in the form of a confessional, to the left of the statue of the Virgin, that may be used by visiting priests. The statue itself is now adorned with the heart that I wrote about earlier. It took about five weeks for the money to be raised through generous donations and the heart pierced with swords was installed and blessed in June.

Som other new additions and developments over the past year include a relic of St. Philomena, acquired through the generous offices of an unnamed Italian monsignor; French and English versions of the Fraternity website (the latter be your humble blogger); the official installation of two young (17 and 18) officials of the fraternity; renewed and increased social media activities and of course a rainy annual procession.

Far north among windy fields she may be, but even there the Blessed Virgin continues to lead people to her Son.

Making headlines is not always easy. I sometimes find myself having completed a blog post with relative ease, only to struggle with coming up with an eye-catching headline. They need to be short, interesting and true to the content of the article they announce and, in essence, summarise. I imagine that these are the same concern of those who write for a living for newspapers, journals and on websites. But in recent days too many have failed to follow the rules…

Yesterday, 20 Roman couples were married in St. Peter’s Basilica by Pope Francis. This is pretty rare for Popes to do for the simple reason of their many other duties. Pope Benedict XVI never did it, and Pope St. John Paul II only got around to it once over the 27 years of his pontificate. But as he is the bishop of the Diocese of Rome, witnessing the marriage of some of the faithful of his diocese is a wonderful opportunity to be near to his closest flock: the Romans themselves. 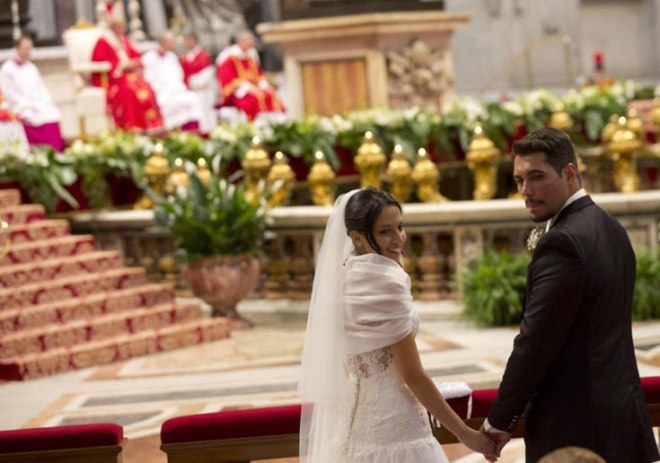 The couples were from all walks of life and a broad range in age, and all had their own stories, as the Pope hinted at in his homily: “The path is not always a smooth one, free of disagreements, otherwise it would not be human. It is a demanding journey, at times difficult, and at times turbulent, but such is life!” Rare are the couples whose story is the stereotypical romantic one: they meet, fall in love, get married, have children and live happily ever after. I think it is safe to assume that none of the twenty couples married yesterday have had such smooth sailing. And that is what inspired many headlines.

“Pope marries sinners,” we read. “Francis overthrows tradition by marrying cohabitating couples!” and more along such lines. The essence of all this was that Pope Francis, they said, in contrast to Catholic teaching and the practice of the Church for years, married people who were living in sin. But was that really true?

The simple answer is no. In reports about yesterday’s ceremony we read that one of the grooms has had a previous married nullified and that a bride already had a child. Others were apparently already living together for a long time before marrying. While it is objectively so that the Church has its concern about children being born outside marriage and cohabitation while not married, these in themselves have never been reason for the Church refusing to marry couples. In fact, it is simply so that the Church gladly welcomes any couple who wants to receive the sacrament of marriage. 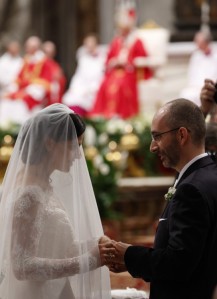 Marriage is a sacrament that includes both rights and duties. To oneself, to one’s  partner, to God and to the community. It is good for the future husband and wife to be well aware of these, be willing to accept them and know how to include them in their lives together. That is a  lifelong process, but it starts before marriage begins.

From the outside we may notice many irregularities – a child outside of marriage, a previous marriage – but we should not jump to conclusions about these 20 Roman couples. All we know is that these irregularities are now regularised, and that is reason for joy.

There is certainly no reason to see sins and new developments where there are none. Pope Francis did not do anything that could not be done before, and nothing that priests across the world don’t do regular (although they would rarely marry forty people in one go). What is remarkable, however, is that it happened. That 20 couples said yes to each other, promised to stand together in good and bad times and let their love bear fruit and new life in all sorts of ways. That’s the true headline.