There’s much to say about Pope Francis’ most recent Curia reshuffle, and a lot has already been said. But, whether you think the changes are good or bad, they are most certainly interesting.

The most visible change is of course the transfer of Raymond Cardinal Burke from the Apostolic Signatura to the Order of Malta. Many see this as a demotion, and in a way that is understandable. As Prefect of the Supreme Tribunal of the Apostolic Signatura his influence on what the Church does with marriage annulments and other difficult legal issues was great. Now he is the Patron of the Sovereign Military Hospitaller Order of St. John of Jerusalem of Rhodes and of Malta, a body which offers medical and emergency aid to people all over the world, boasting about 20,000 medical personnel and 80,000 volunteers to make a major difference in disaster areas and for refugees and the sick. The Order retains a level of independence from the time when it was sovereign over Rhodes and later Malta. It has the status of Permanent Observer at the United Nations and issues its own passports. Cardinal Burke has become the Patron of this order and as such does not lead it (that is the duty of the Grand Master of the Order), but is responsible for the spiritual wellbeing and its relations with the Holy See.

There have been Patrons of the Order of Malta only since 1961, and all were cardinals who ended their career in the Church in this position. Cardinal Burke is 66, and many say that his career should be far from over, so this position seems hardly fitting for him. So has Pope Francis promoted Cardinal Burke away because he was an obstacle? The simple answer is that we don’t know, because neither the Pope nor the cardinal have made statements about it. Cardinal Burke did announce that his transfer was coming up (which is unusual in itself), but that is about as far as it goes. However, there are plenty of grounds to make assumptions, and many have done so. I don’t want to that, because, quite frankly, it doesn’t interest me to do so and I think that assumptions and gossip do more bad than good.

Cardinal Burke has been quite present in the media before, during and after the Synod, and he has been a consistent defender of the Catholic faith. It is sad that many don’t hear him because, in my opinion, his communication skills are less than optimal. Too often have there been statements which just begged to be misunderstood, such as when he said that there are faithful who feel as if the Church is sailing without a rudder. Many have seen this as outright criticism of Pope Francis, something that Cardinal Burke has denied. And a reading of his words support this, but that’s not what the audience hears. Subsequent corrections rarely reach their target. That has been a major problem for Cardinal Burke in recent months. It’s not that his words are wrong or his intentions are bad, on the contrary: he deserves to be heard, for what he says is valuable and wise. But communication is difficult, especially via the media. It is never objective, and people for images of people. Cardinal Burke, sadly, has generally become to be seen as a mean old traditionalist who hates mercy and doesn’t understand people. Fro what I gather from certain people who personally know the cardinal, that is far removed from the truth.

This, at least, gives a bit of a bad taste to his transfer, but it’s not all bad. When we heard from Cardinal Burke, it was rarely because of his function at the Signatura. And as Patron of the Order of Malta he is as free as ever to speak, explain and comment, even when his focus is on the charity work of the Order and the spiritual needs of its members.

Much has been made about the fact that Cardinal Burke is very young to be named Patron of the Order of Malta. But is that really true? When we look back at previous Patrons, we see that 66-year-old Cardinal Burke is only slightly on the young side. Below I list his predecessors since the position was created in 1961, and their age upon their appointment:

So yes, Cardinal Burke is the youngest Patron to date, but the difference in age between him and the three next youngest is only five years. And even when we look at the number of previous assignments and offices held, Cardinal Burke does not stand out. He has held six previous offices, which is more than Cardinals Sardi, Philippe and Violardo. Only Cardinals Laghi and Baggio have held significantly more positions before being made Patron of the Order of Malta.

So, according to the numbers, Cardinal Burke stands out only slightly when it comes to age. The patronage of the Order of Malta has a reputation as being an end station with little importance. The members of the Order will perhaps conclude otherwise, and there is always the example of Cardinal Baggio, who combined it with the office of Chamberlain of the Church…

But the other two appointments that make up this round of Curia changes are also worth the attention as they raise their own questions and conclusions. 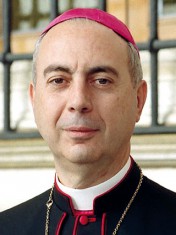 Replacing Cardinal Burke as Prefect of the Supreme tribunal of the Apostolic Signatura (and also as President of the Supreme Court of the Vatican City State) is Archbishop Dominique Mamberti. The Morocco-born French archbishop is a career diplomat, which makes his new appointment somewhat unexpected. As a diplomat, Archbishop Mamberti was Apostolic Nuncio to the ‘difficult’ countries Sudan, Eritrea and Somalia before being called to Rome in 2006 to become the second man at the Secretariat of State, the Secretary for Relations with States, often described as the Vatican ‘foreign affairs minister’. In recent years he has been especially concerned with the plight of Christians and other persecuted minorities in the Middle East. Archbishop Mamberti is titular archbishop of Sagone, and may well be a future cardinal. What the experienced diplomat will bring to the ecclesiastical courts remains to be seen, but a wide outlook influenced by various cultures and societies across the globe seems to be one aspect. 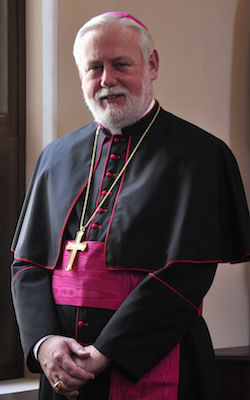 In the final act of this curial musical chairs, the new Secretary for the Relations with States comes from England by way of Australia. Archbishop Paul Gallagher is the first Anglophone foreign minister and although he is also fluent in Italian, French and Spanish, his being a native English speaker should be a boon to the international outlook of the Secretariat of State and the Holy See.

Archbishop Gallagher comes from Liverpool and was a priest of that archdiocese until joining the Holy See diplomatic service in 1984. He served in various countries, but his first posting as Apostolic Nuncio, to Burundi, saw him succeeding an assassinated predecessor and he himself was the target of a bombing in 2008. He escaped unscathed as he was abroad at the time. He was later Nuncio to Guatemala and most recently to Australia. He is the titular archbishop of Hodelm and will likely remain so, as the position of Secretary for the Relation with States is traditionally not a cardinalatial position.

Once again, these changes show that Pope Francis does not necessarily choose the obvious candidates for the post, but does attach much weight to diplomatic experience. We see that in the choice of Archbishops Mamberti and Gallagher, and even in the transfer of Cardinal Burke, which may well serve in giving him additional international experience.