I came across this photo tonight, of a priest in a crowd of people, looking up at the figure of Pope Pius XII. The faces of the people and the priest express concern, shock and sorrow, and with good reason. The scene of the photo is the district of San Lorenzo in July 1943, in the aftermath of the only Allied bombing of Rome. 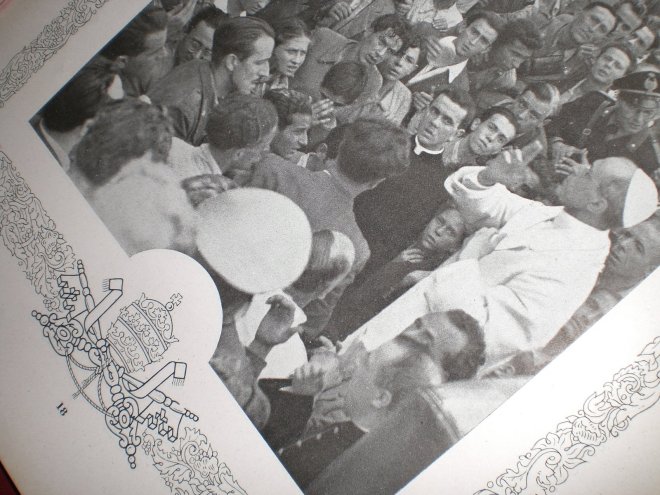 The priest is Fr. Fiorenzo Angelini, ordained in 1940, and many years he would recall this moment:

“Among the living and the dead, in the midst of the rubble, that is how I found him for the first time. There he was. The Holy Father approached and I admired immediately the greatness of his character, the greatness of his spirit, of a pastor not only endeared, but tied to the souls of the entire world, but in that moment present to his Roman faithful.”

Pope Pius XII had come out to the stricken city to comfort the citizens, even before the sirens had gone quiet, and from that moment on, the priest formed a bond with the pontiff which would last well past the death of the Pope in 1958. In 1956 Father Angelini was made a bishop for his work promoting health care in the Italian capital and in 1977 he was made an auxiliary bishop of Rome. It was only a matter of time before his work was expanded to include the entire Church, and in 1985 he headed the Pontifical Council for Pastoral Assistance to Health Care Workers until his retirement in 1996. In 1991 he was made a cardinal.

Today, at the age of 98, Cardinal Fiorenzo Angelini passed away, the second-oldest cardinal of the Church, and a 74-year bond with the wartime pontiff ended, at least in this world.