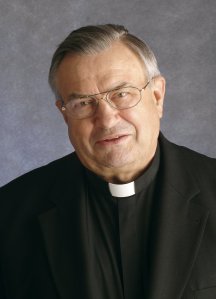 In an interview for the Frankfurter Algemeine, Karl Cardinal Lehmann, the bishop of Mainz and the most senior of Germany’s active bishops, talks about various topics – the Second Vatican Council, Helmut Kohl, ecumenism, his upcoming retirement (expected for May of 2016), but standing out is his reluctant assessment of the Limburg affair, the financial mismanagement which led to the forced retirement of Bishop Franz-Peter Tebartz-van Elst.

“I don’t much like addressing the topic of Limburg any longer. But we should consider what we can learn from it. The impact of Limburg is always very close. I’ll give you an example. It’s about the construction of a house for the church community in Worms. The word “Limburg” is thrown about immediately, or signs with the texts “Limburg is everywhere” appear. The whole situation escalated in Limburg since they waited far too long with giving an explanation.”

It turns out that Cardinal Lehmann and the other bishops offered their help to Bishop Tebartz-van Elst, but that he did not take it.

“From the start I told Bishop Tebartz, “It’s not easy for you. You have a charismatic predecessor, Franz Kamphaus, and people don’t get used to a successor very quickly. We will help you where we can. Come and ask.” But he hasn’t asked us anything.”

“As president of the Bishops’ Conference, Archbishop Zollitsch had asked Bishop Tebartz twice in the standing council – that is the meeting of the bishops without the auxiliary bishops – if he could tell us something about the allegations which had been raised in Limburg. Bishop Tebartz twice had 20 or 25 minutes to explain the situation. And there, I am sorry to say, he avoided all the difficult questions. When the request was then made to publish an official statement for him, some of us said, “I can’t do that, since I don’t really know what’s going on in Limburg.” Had Bishop Tebartz been more collegial and open, he would have gotten more support from us. I’m sorry.”

It is clear that serious mistakes and errors of judgement lie at the root of the mess in Limburg, but it is sad to see that hands extended in help were ignored. The removal of Bishop Tebartz-van Elst was the only possible choice in such a situation, I’d think.