In Belgium, the bishops, meeting at Grimbergen Abbey, have elected their new president. Unsurprisingly, it is Archbishop Jozef De Kesel. It is customary for the archbishop of Mechelen-Brussels to be elected as president. In fact, since the Bishops’ Conference of Belgium was established in the late 1950s, the country’s one archbishop has aways been chosen to head the conference. As vice-president the bishops selected Bishop Guy Harpigny of Tournai and Bishop Johan Bonny of Antwerp. With secretary general Herman Cosijns they are the bishops’ conference’s permanent council. The conference consists of the ordinaries and auxiliary bishops of the Belgian Church province, and has eleven members. 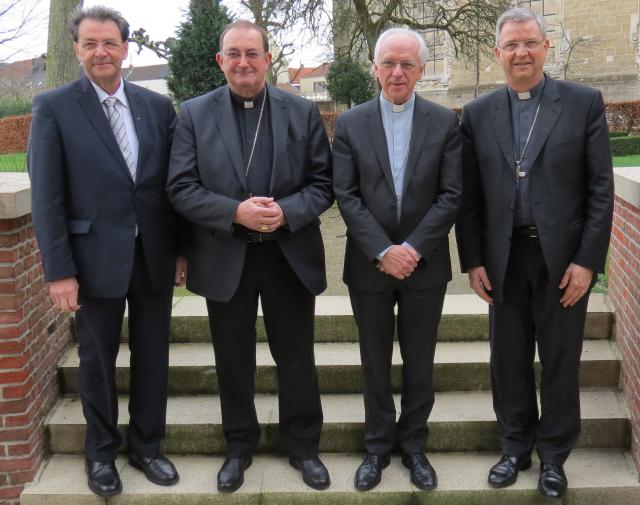 In the Netherlands, the Dutch bishops are also looking ahead to the election of their new president, later this year. Cardinal Wim Eijk is concluding his term, which began in June of 2011. The cardinal issued a press statement today, saying he will not be available to serve a second term. That means that, whoever the new president will be, the Dutch Bishops’ Conference will, for the second time, be headed by someone else than the archbishop of Utrecht. The first time was from 2008 to 2011, when Rotterdam’s Bishop Ad van Luyn held the office.

As reasons for his ineligibility, Cardinal Eijk gives two reasons. The first is that he has been suffering from a painful joint disorder, which sometimes causes him to have trouble walking. This is not the first time that health issues have plagued the cardinal. Shortly after his appointment as bishop of Groningen in 1999, a nervous condition affecting his face had him in recovery for several months. The second reason given in the statement is the cardinal’s desire to be able to spend more time in and for the Archdiocese of Utrecht, especially pastorally. The challenges of continuing secularisation are specifically cited as something that Cardinal Eijk wants to give as much attention to as possible. The press statement further hints at a further reason: the stress of the  past five years, when the sexual abuse crisis especially demanded much time and attention.

This is not the first time that Cardinal Eijk, as archbishop of Utrecht, is not up for election. It also happened in 2008, when he was just appointed as archbishop and wanted to spend the time on familiarising himself with his new duties.

^The Dutch Bishops’ Conference in its current composition, photographed in Rome during their Ad Limina visit in 2013.