Wednesday is Ash Wednesday, the start of Lent (yes, it’s almost Lent already), and in this Holy Year of Mercy it is also the day of another notable event: the day on which more than one thousand special “missionaries of mercy” are sent out by the Pope into the world, to manifest God’s mercy in a specific way, by their ability to forgive the most grave of sins, which are usually beholden to bishops or the Pope alone.

Earlier, we already learned that all priests in the world have been given to authority to forgive the sin of abortion (normally residing with the bishop, all Dutch priests have had this faculty already). Archbishop Rino Fisichella, who is the chief organiser of the events of the Holy Year, outlines the five sins which can only be forgiven by the special missionaries of mercy. These are:

Of course, some of these are more likely to happen than others, but they all touch upon the core values of our faith and Church: the sanctity of sacraments, the unity of the Church and the seriousness of vows and promises. By making the forgiveness for such sins more easily available, Pope Francis wants to emphasise that, even in such serious matters, mercy comes first (with the caveat that true mercy always incorporates justice). 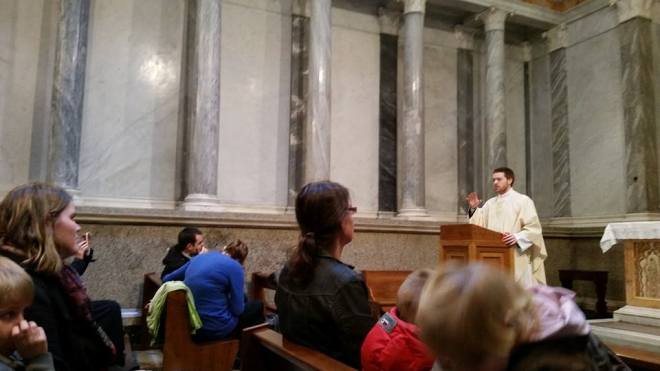 13 priests from the Netherlands and 33 from Belgium (11 from Flanders, 22 from Wallonia) will be appointed as missionaries of mercy. One of the Dutch priests is Fr. Johannes van Voorst, of the Diocese of Haarlem-Amsterdam (one of seven from that diocese; the other six come from the Diocese of Roermond). Fr. Johannes (seen above offering Mass at St. Paul Outside the Walls today) will be going to Rome to receive his mandate, together with some 700 of his brother priests (the remaining 350 or so will receive their mandate at home). His adventures in Rome can be followed via his Facebook page, where he also posts in English.

After receiving their mission, the names of the missionaries will be made known, so that they can be at the disposal of the faithful in the country.

One thought on “Sent out into the world for mercy”