After a 10-month vacancy, and just before it hosts the biggest national Catholic event of the year, the 100th Katholikentag, the Diocese of Dresden-Meißen has a new bishop. He is 63-year-old Heinrich Timmerevers, until today one of the five auxiliary bishops of Münster, where he was regional bishop for the diocese’s northern exclave of Oldenburg and Vechta. The news was announced today at noon in Rome and Vechta, where the bishop currently resides. 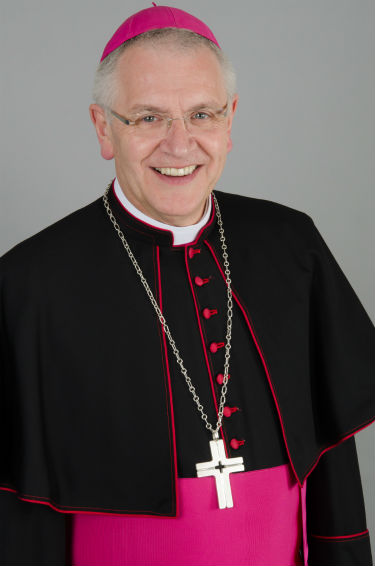 Heinrich Timmerevers was born in the small town of Garrel, southwest of Oldenburg, as second of six children in a farmer’s family, and attended school in nearby Cloppenburg, where he graduated in 1972. he studied theology and philosophy in Münster, where he also entered the seminary. For a short time he studied in Freiburg, but returned to Münster for his graduation in 1977. In 1997 and 1978 he attended a spirituality course of the Focolare movement, which he got to know in seminary, in Rome.

Bishop Reinhard Lettmann of Münster ordained Heinrich Timmervers in 1980. Until 1984 he worked as a priest in Visbek, not far from his native Garrel. He then became subregent of the Collegium Borromaeum, Münster’s diocesan seminary and was attached to the cathedral of St. Paul. In 1990 he returned to Visbek. He represented the kfd, the Catholic Women’s Community in the Oldenburg pastoral area.

In 2001, Pope John Paul II appointed Fr. Heinrich Timmerevers as an auxiliary bishop of Münster, with the titular see of Tulana. At the same time, Bishop Lettmann appointed him as episcopal representative in Vechta for the entire northern area of the diocese. Bishop Lettmann, together with then-auxiliary Bishop Werner Thissen (later archbishop of Hamburg, now retired) and retiring auxiliary Bishop Max Georg Freiherr von Twickel (now deceased), consecrated him on 2 September 2001. Bishop Timmerevers chose the German phrase “Suchet, wo Christus ist” as his episcopal motto. In 2002, the new bishop joined the cathedral chapter.

Bishop Timmerevers will be the ninth bishop of Dresden-Meißen since the diocese restoration in 1921. The diocese is located in eastern Germany along the Czech border, covering most of the state of Saxony and small parts of Thuringia and is part of the Church Province of Berlin, togetehr with the Diocese of Görlitz and the Archdiocese of Berlin. With the appointment of Bishop Timmerevers, all these sees are filled again. In Germany, the dioceses of Aachen and Limburg now remain vacant.

The website of the Diocese of Dresden-Meißen, which went offline for a few hours following the announcement of the new bishop, features a letter of Bishop Timmerevers to his new flock:

Today Pope Francis appointed me as new bishop of Dresden-Meißen. In the past week, Dean Klemens Ullmann informed me of the election by the cathedral chapter. It moved and pleased me greatly, but also worried me inside. I took several days until I was able to accept with all my heart this vocation and the renewed calling of Jesus to follow Him.

But I am willing and will leave my Oldenburger homeland, to come to you in the diocese. I am supported by the word addressed to Abraham (Gen. 12:1): “Go from your country and your kindred and your father’s house to the land that I will show you”. I gladly accept this new calling and mission in the Diocese of Dresden-Meißen. I look forward to the people living there, to the many encounters and conversations. I also look forward to being Church together with you. I came as a learner to you and want to learn new things.

The Catholic Church in your diocese exists in a situation of diaspora and has kept the faith in difficult times. This impresses me greatly. I look forward to the challenges that await me, and will be happy to have you show me your country.

I rejoice in serving the people in the Diocese of Dresden-Meißen from now on, to strengthen the Christians, to build up the Church and make her present in the world. For these tasks I pray for God’s blessing and for your active support.

One thought on “Once again, west goes to east – Heinrich Timmerevers is the new bishop of Dresden-Meißen”