Dutch Prime Minister Mark Rutte had a private audience with Pope Francis today. The 20-minute meeting took place not in the Apostolic Palace, as such meetings normally do, but in a small backroom of the Paul VI Hall. Things always have to be different with the Dutch, I suppose. 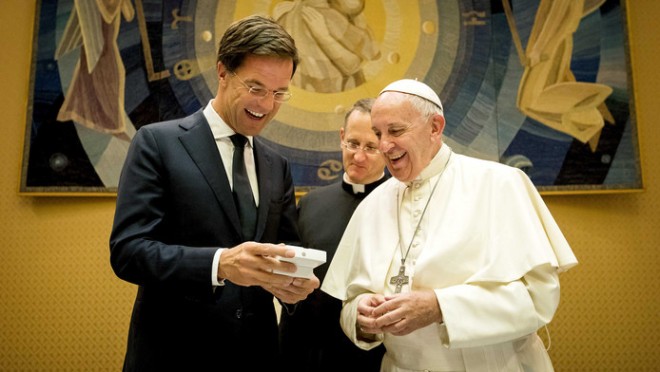 While the timing of the meeting, relatively soon after a personal meeting of the Dutch royal family with the Holy Father in late April, had led to some speculation about a papal visit to the Netherlands, it was fairly standard. The two men discussed youth unemployment in Europe, the wars in the Middle East and the refugee crisis. The prime minister said he was impressed by Pope Francis’ simplicity, and called him “a man with authority”.

The Pope gave the prime minister a tablet with peace symbols and copies of three papal documents (one would imagine including Amoris laetitia and Laudato si’).

Mr. Rutte also met with the Secretary of State, Cardinal Parolin and the Secretary for relations with states, Archbishop Gallagher.

And the papal visit? “That’s up to the bishops,” Mr. Rutte commented.

The Archdiocese of Mechelen-Brussels came with a rather puzzling press statement today, announcing an end to the diocese’s cooperation with the Fraternity of the Holy Apostles. This fraternity of priests was invited to Brussels by Archbishop André-Joseph Léonard, but apparently his successor, Archbishop Jozef De Kesel, wastes no time in shutting them down. Even as the news broke, the priests of the fraternity were still meeting with the staff of the archdiocese.

There are rumours that there is more to the decision than the press release states, but as that is the official position of the archdiocese, it must be taken seriously, strange as it is.

This is the full text of the statement, translated by me: 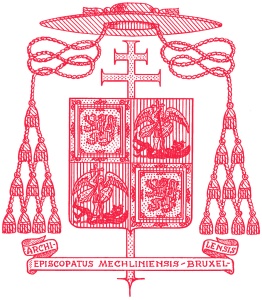 “The Fraternity of the Holy Apostles was established in 2013 as a “public clerical society of faithul” of diocesan right. It falls under the responsibility of the Archdiocese of Mechelen-Brussels.

The Fraternity has 27 members, 6 priests and 21 seminarians of whom one is a deacon. Of the 27 members, 21 reside in Belgium and 6 in France, especially in the Diocese of Bayonne. The majority of the current members comes from France.

It is the Fraternity’s main purpose to make young people sensitive to the beauty of the vocation to the diocesan priesthood. Answering that vocation does not necessarily mean that one stands alone: the priest can rely on the support and solidarity of the brothers with whom he forms a fraternity. This option is indeed very valuable in the life of the priest today.

This initiative, however, presents a problem when one realises that at the moment the majority of the Fraternity’s seminarians comes from France, where so many areas suffer from a distressing shortage of priests. Of course, it is possible that the number of Belgian seminarians, both French- and Dutch-speaking, can increase over the years. But then, too, they will come from other Belgian dioceses to become priests for the archdiocese.

In the current situation it is better not to encourage such a process. It would indicate a great lack of solidarity among the bishops, both with the bishops in our country as with the French bishops. That is why the archbishop of Mechelen-Brussels decided to no longer work with the Fraternity of the Holy Apostles in his diocese from the end of June 2016 onwards.

Those members of the Fraternity who have already been ordained as priests or deacons serving the archdiocese remain priests or deacons of the archdiocese, as prescribed by canon law. Regarding their appointment the arcbishop will take into account what was dear to them when they entered the Fraternity. In this context, and contrary to what some rumours would have us believe, it is the arcbishop’s wish that the experiences of the church of St. Kathelijne [the Brussels church entrusted to the pastoral care of the Fraternity – MV] may by further developed.

The seminarians can, if they so wish and if they meet the demands for the formation of priests of the archdiocese, continue their education at the diocesan seminary.

This decision of the archbishop is the result of long deliberations with his auxiliary bishops and the diocesan council. A special commission has met with all the member of the Fraternity residing in Belgium. The Belgian bishops were also consulted and support the decision, as do the responsible departments of the Holy See.”

So, in short, the Fraternity has too many priests from abroad, and while the archdiocese continues to make use of the priests already ordained (if only because canon law demands it), the other members can basically do whatever they please. Sure, the seminarians are welcome at the diocesan seminary, if they are good enough and if they really must, but there’s no pressure.

I can accept that there are parts of France where priests are few, but the Belgian bishops are fooling themselves if they think the same is not true, or will be in the foreseeable future, for their own dioceses. The Fraternity is drawing young men who want to work as priests in the Archdiocese of Mechelen-Brussels. The archbishop should be overjoyed by this. Instead, there is misplaced talk of solidarity with the other bishops. Instead of closing a successful institution because it might draw future priests away from other dioceses in Belgium or France, the bishops would do better by looking at what it is that makes the Fraternity work and adopt that in their own seminaries. There is a good chance that it is this what caused the Fraternity’s seminarians to choose the Fraternity over a diocesan seminary.

By this decision’s logic, I might add, the seminaries of the Neocatechumenal Way should also be closed. These also train seminarians from other countries to work in Belgium or whatever country they are sent to. They, too, should return to the seminaries of their home dioceses, out of solidarity with the bishops there…

Like I said, this is a puzzling decision. It could well be that the true reasons remain secret, and that there is much more going on. The Fraternity has in the past struggled with accepting and submitting themselves to episcopal authority, and that is indeed problematic. But if such problems lie at the root of this decision, let it then be said. If today’s press statement is true, it is evidence of serious short-sightedness on the part of the archbishop and the other bishops; if there is instead more going on, the statement is deceitful.

Lastly, it is hard not to see this as a slap in the face of the archbishop emeritus, André-Joseph Léonard, who lived with the Fraternity for a short while between his retirement and his departure for France. He brought them to Brussels, seeing them as an asset in the new evangelisation of the Belgian capital.