Yesterday, Pope Francis chose Cardinal Cormac Murphy-O’Connor to be his official representative at the consecration of the new cathedral in Trondheim, Norway. Where Church attendance falls all over northern and western Europe, the Scandinavian dioceses (and two territorial prelatures, of which Trondheim is one) are showing growing numbers, chiefly through immigration from countries such as Poland and the Philippines. 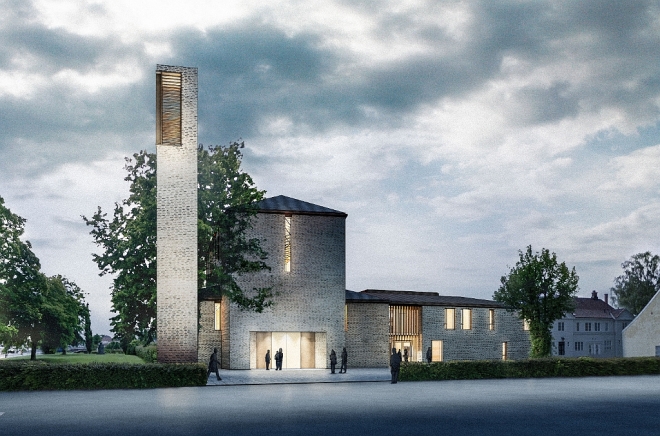 An artist’s impression of the finished cathedral, seen from the north side.

The new cathedral, dedicated to Saint Olav like its predecessor, will be consecrated on 19 November. Cardinal Murphy-O’Connor, who was the archbishop of Westminster from 2000 to 2009, will concelebrate and give the homily during the Mass. He is present not in his own name, but in the name of the Holy Father. Papal envoys are usually sent to major events, such as the consecrations of cathedrals or national eucharistic congresses.

There is more than one reason for the Territorial Prelature of Trondheim to build a new cathedral. The previous building, completed in 1973, was structurally unsound since the beginning and had reached the danger of collapse in recent years because of rusted steel beams.

Another reason is one I have mentioned above: the growing Church in Norway. Trondheim is home to some 10,000 registered Catholics of 70 different nationalities. Before building a new cathedral other solutions were found to accomodate the growing number of faithful, such as refurbishing existing building or using buildings owned by the municipality, but none proved permanently satisfactory or even possible,

There was also a desire to make the Catholic Church in Norway more visible, going back to the visit of Pope Saint John Paul II in 1989. Trondheim is the birthplace of Norwegian Catholicism and this, coupled with increasing Catholic involvement in ecumenical contact in Norway, has led to the wish to increase this visibility by adding a distinctive Catholic presence to the skyline. The proximity of the shrine of St. Olav – in the Lutheran cathedral nearby –  and the growing number of pilgrimages made to that shrine has also played its part.

The Territorial Prelature of Trondheim is one of Norway’s three ecclesiastical circumstriptions and covers central Norway. It is the current incarnation of the medieval Archdiocese of Nidaros, which was suprressed in 1537. Trondheim is currently administered by the Bishop of Oslo, Bernt Ivar Eidsvig.