After some uncertainty about the retirement of the previous one, Pope Francis today appointed a new Apostolic Nuncio to Belgium. The new ambassador of the Holy See to the Kingdom of Belgium, and representative of Rome to the Catholic Church in Belgium is an experienced diplomat who has served as a Nuncio since 1998. 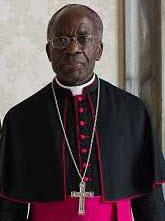 Archbishop Augustine Kasujja hails from Uganda, where he was born in 1946. In 1973 he was ordained a priest for the Archdiocese of Kampala, and he entered the Holy See diplomatic service in 1979. He served in various countries, including Argentina, Haïti, Portugal, Peru and Algeria. In 1998 he was appointed as Apostolic Nuncio to Algeria and Tunisia, and with that he was consecrated as archbishop of the titular see of Cesarea in Numidia. In April of 2004 he was transferred to Madagascar and the Seychelles as Nuncio, combined with the office of Apostolic Delegate to the Comoros. In June of that same year he also became the Nuncio to Mauritius. In 2010 he was appointed to Nigeria, where he served until his appointment today. It is assumed that Archbishop Kasujja will arrive in Belgium in the course of November.

Now 70, it makes sense to assume that the archbishop will complete the five years until his retirement in Belgium. As Nuncios play an important role in the appointment of bishops (they provide detailed reports on the three candidates selected by the cathedral chapter of the diocese in question and pass that on, together with their own advice, to the Congregation for Bishops, which then passes it on the Pope. The Pope can then use the report and advice to make his choice), it is perhaps interesting to see for which bishops Archihsop Kasujja will help pick a successor.

Archbishop Kasujja’s appointments is noticeable in that he is not only the first non-European Nuncio to Belgium, but also the only African Nuncio in Europe at this time.

The Apostolic Nunciature to Belgium in its current form dates back to 1843, although there have been interruptions in the presence of Nuncios (there were none from 1846 to 1866, 1868 to 1875, 1880 to 1896 and 1911 to 1916). Archbishop Kasujja is the 21st Apostolic Nuncio to Belgium, and the most notable of his predecessor is the first in that list, who served from 1843 to 1846: at the time Archbishop Vincenzo Gioacchino Pecci, he became Pope Leo XIII in 1878. Fourteen of the previous Nuncios to Belgium later became cardinals.

One thought on “After a new cardinal, now a new Nuncio for Belgium”