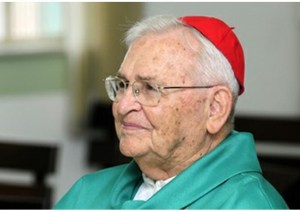 The death of Cardinal Paulo Evaristo Arns at the age of 95 today leads to an interesting change in the College of Cardinals, albeit a ceremonial one with virtually no effect of the day-to-day affairs of that body.

Cardinal Arns was created a cardinal by Blessed Pope Paul VI in 1973. His death leaves only one surviving cardinal, albeit a former cardinal, created by that Pope. He is the Pope emeritus, Benedict XVI, created in the four-man consistory of 1977 (the blessed pope’s last one).

Cardinal Arns was also the most senior of the Cardinal-Priests, one of three classes of cardinals. This gave him the office of protopriest, which entailed certain duties following the election of a new Pope. The protopriest pronounces the formal prayer for the new Pope after the protodeacon has bestowed the pallium and before the Dean of the College of Cardinals presents the Ring of the Fisherman. That said, Cardinal Arns never exercised that duty as he was not present at the inauguration of Pope Francis, and Cardinal Danneels acted in his stead. 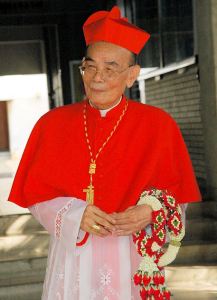 The new protopriest is Cardinal Michael Michai Kitbunchu, 87, retired archbishop of Bangkok and created in Pope Saint John Paul II’s second consistory in 1983 (the same consistory in which Cardinals Danneels and Meisner were created. Cardinal Kitbunchu is protopriest only because his name came before theirs on the official list).

Cardinal Paulo Evarista Arns was auxiliary bishop of São Paulo in Brazil from 1966 to 1970, and archbishop of that same see from 1970 to 1998. As cardinal he held the title church of Sant’Antonio da Padova in Via Tuscolana. He had been protopriest since 2012, the third Brazilian in that role after Cardinals Sales (2009-2012) and De Vasconcelos Motta (1977-1982). Cardinal Arns had been in hospital since the end of November for pneumonia. An obituary for the ‘cardinal of the people’ may be read here.