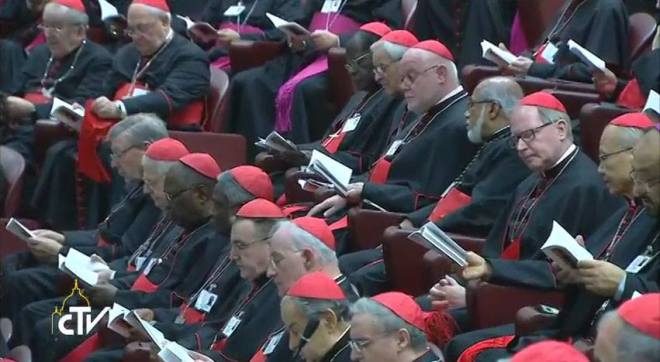 ^Cardinal Eijk, fifth from the left in the second row, participates in a session of the Synod of Bishops.

Upon the publication of the official Dutch translation of Amoris laetitia, last Thursday (yes, a whopping nine months after the apostolic exhortation was released in Rome), Cardinal Wim Eijk, who participated in both sessions of the Synod of Bishops which resulted in the papal document, provided a brief quote about the topic that continues to keep pens writing and keyboard clicking: The Footnote which may or may not open the door to the sacraments for divorced and civilly remarried faithful. About the debate about Amoris laetitia the cardinal says,

These various interpretations are, I believe, also the reason for the dubia presented by the Four Cardinals (Brandmüller, Burke, Caffarra and Meisner) . They ask for clarification, stating that confusion exists. The fact that there are rather contrasting interpretations is enough to show that they are right.

Cardinal Eijk treads carefully, speaking about “possibly unclear passages”, but makes clear that the intepretations of a passage do not change anything in doctrine or Tradition. The compentent authority, in this case the Pope, is the only who can do that. As it looks now, he has no inclination to do so directly, which means that, for the foreseeable future, the confusion will continue.

Who knows, perhaps things will settle down in time, at which point clarifications will find more open minds. At this moment, as Cardinal Eijk indicates, and more than a few others with him, Amoris laetitia has not changed anything about the Church’s doctrine. How we approach that doctrine and put it into practice, however, is open to change, adaptation and, most importantly, improvement. And that, I believe, is what Pope Francis is aiming for.