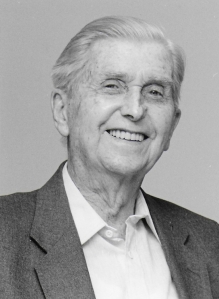 On Wednesday, on a hospice in Wijchen near Nijmegen, the oldest Dutch bishop passed away: Msgr. Herman Münninghoff, bishop emeritus of Jayapura in Indonesia. Aged 96, he was among the last surviving bishops who had left the Netherlands for the mission in the years following the Second World War.

In his early 20s when the war broke out, young Herman spent the final years of that conflict in hiding, attempting to avoid deportation to Germany to work there in the war industry.  A failed raid by the German secret police led him to sanctuary with the Franciscans in Megen. “That is how I escaped from the German police, but not from the net that the Lord had cast for me. In the middle of war and violence I heard His voice in Megen!”

Ordained a Franciscan priest in 1953, Fr. Münninghoff left for Indonesia to work in the mission there. Of his work, he would later say, “Of what a missionary does maybe ten or fifteen percent – I don’t know, I didn’t do the sums – is related to religion and church. The rest is all in the fields of medicine, health care, culture, what they’re not at all familiar with. I think that is one of the most important things. The development of these people must take the very first place in missionary work.”

In 1972, after a short time as parish priest and vicar general, he was appointed as bishop of Jayapura, on the northern coast of Irian Jaya, the Indonesian half of the island of New Guinea. He stayed in office until his retirement in 1997, returning to the Netherlands in 2005. As bishop he stood with the Papuan people and for the well-being of all, most significantly in the 1990s, when he fought for the release of several western hostages held by Papua freedom fighters, and a black book by his hand led to the arrest of four Indonesian military officers for the murder of eleven Papuans. Bishop Münninghoff also insisted that the union of Irian Jaya with Indonesia in 1969 was a forced one, with Papuan elders coerced to vote in favour of the move.

In 2017, Bishop Münninghoff celebrated the 45th anniversary of his ordination at the care facility in Wijchen, with Msgr. Theodorus Hoogenboom, auxiliary bishop of Utrecht, as the main celebrant.