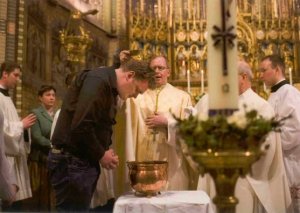 Easter is the time for Baptism, and every year, the Church rejoices in welcoming new faithful to her flock. Catholic weekly Katholiek Nieuwsblad asked the seven Dutch dioceses how many Baptisms they added to the books at Easter this year. The number: at least 147.

The standout diocese is Rotterdam, with 80 new Catholics. They are followed by Haarlem-Amsterdam with 48, Groningen-Leeuwarden with 13 and Breda with 6. The Archdiocese of Utrecht and the Dioceses of ‘s-Hertogenbosch and Roermond provided no exact numbers.

Like myself 11 years ago, the majority of new Catholics also received the sacraments of Confirmation and first Holy Communion. The number mentioned above does not, however, consist solely of newly baptised. Some people had aready been baptised in other church communities and now entered the Catholic Church.

For Belgium the number stands at 239, Kerknet reports. The numbers only refer to (young) adults becoming Catholic.