After a seven-month vacancy, the Catholic Church has a Chamberlain again. Not that that makes any difference for the time being, but there are a few interesting implications all the same. The Chamberlain of the Apostolic Camera exercises his duties, in cooperation with the vice-chamberlain and other officials, when there is no pope. These duties include the notification of the world of a pope’s death, preparations for his funeral and the conclave for the election of a new pope, and the communication of financial reports of the various dicasteries, as well as the will of the late pope, to the College of Cardinals. While the government of the Catholic Church during a sede vacante lies with the College of Cardinals, the Chamberlain has just enough authority to allow the continued functioning of the aparratus of the Church, without making any changes or decisions. 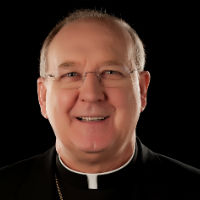 In 2014, Pope Francis chose Cardinal Jean-Louis Tauran as his chamberlain. Of course, he never exercised his duties before his death in July of last year. Today, Pope Francis announced Cardinal Tauran’s successor: Cardinal Kevin Joseph Farrell. The 71-year-old prelate, who serves as the prefect of the Dicastery for Laity, Family and Life is the first non-European to be chosen as chamberlain. Cardinal Farrell is Irish, but has long served in the United States before coming to Rome in 2016, first as auxiliary bishop of Washington under former cardinal (and, it is said, soon-to-be laicised) Theodore McCarrick, and then as bishop of Dallas. There has been a chamberlain since 1089, and the vast majority of them have been either Italian or French, with a two Spaniards and an Englishman thrown in for good measure.

Cardinal Farrell is not that surprising a choice, as he has been a close collaborator of the pope for the past few years. He was called in from Dallas to lead the newly-established Dicastery for Laity, Family and Life, a duty which lies close to the heart of Pope Francis.

At 71, Cardinal Farrell may be expected to remain chamberlain until somewhere around his 80th birthday. Considering that Pope Francis will then be 90, it is not unimaginable that he actually get to exercise his duties when the time comes.