On Saturday afternoon the Dutch bishops consecrated their dioceses to the Immaculate Heart of Mary, coinciding with the centenary of the first apparition of Mary in Fatima and the tail-end of Pope Francis’ visit to that pilgrimage site in Portugal. The bishops did so at the Basilica of the Assumption of Our Lady in Maastricht. All the active Dutch ordinaries and auxiliary bishops were present, as was Cardinal Ad Simonis, archbishop emeritus of Utrecht. From Groningen-Leeuwarden, which is expecting their new bishop on 3 June, diocesan administrator Fr. Peter Wellen was present.

Cardinal Wim Eijk, archbishop of Utrecht and metropolitan of the Dutch Church province, led the consecration during a Vespers, and gave the following homily:

“After the downfall of the Portuguese royal house as the result of a revolution in 1910, a very anticlerical government came to power in which freemasons dictated the tone. This government issued various measures against the Church: the wearing of priestly clothing was forbidden, as was taking religious vows; monasteries and religious orders and congregation were abolished by law and their possessions confiscated; Jesuits were forced to renounce their Portuguese citizenship; religious education in schools was abolished and the government gave themselves the right to appoint professors to seminaries. The brain behind these measures, Alfonso Costa, had the goal of eradicating Catholicism in Portugal in two generations.

He did not succeed in this for various reasons. The faith of the Portuguese people was too strong en the Holy See resisted successfully. But a very important factor was the apparitions of Mary to three shepherd children in Fatima: Lucia, Francisco and Jacinta. These apparitions greatly impacted Portugal, as well as, by the way, the rest of the Catholic world. After an angel appeared to them in 1916, Mary first appeared to them om 13 May 1917. She would do so six times in the period between 1 May and 13 October 2017.

The apparitions of Mary at Fatima are part of a string of important Marian apparitions: in La Salette in 1946, Lourdes in 1858 and Castepetroso in 1888. At all these apparitions, Mary’s message was that we should return to Christ, the Son of God and her son, do penance to gain forgiveness for our own sins and those of others and devote ourselves intensively to prayer, especially the Rosary. But of all these apparitions, those at Fatima were the most prophetic.

This had to do with the content of the three secrets that Mary entrusted there to the shepherd children. The first concerned a vision of hell and a call to prayer, conversion and penance to save souls and bring them to eternal salvation. The existence of hell was (and is) denied by many Christians and is not or barely mentioned by Christian preachers and catechists. The solemn warning of Mary must, however, be taken serious.

The second secret was an announcement of the end of the First World War, but also of the Second World War if people would not stop insulting God. Mary called for prayer and penance to implore God to bring peace. She also asked to consecrate Russia to the Immaculate Heart to prevent atheistic communism to spread from Russia to other countries. Various popes, beginning with Pius XII in a radio message on 31 October 1942, have responded to this. It is significant that communism in Russia fell in 1989.

The third secret was a vision of a bishop in white, the pope, being persecuted, falling down as if dead under the sound of gunshots amid the bodies of bishops, priests, religious and lay people, fallen like martyrs for the faith under communism and fascism. It is an image of the way of the cross that the Church, led by the popes, has gone. On 13 May 2000, Cardinal Sodano announced, during a visit of Pope John Paul II to Fatima, that this vision referred the attack on the pope in St. Peter’s Square in Rome on 13 May 1981.

How should we now look at Mary’s messages in Fatima, and what do they add to our faith in Christ, our Saviour and Redeemer? The revelation of Holy Scripture, the public revelation to all of humanity, has been completed with Jesus Christ. Nothing can be added to that.

Mary’s messages to the shepherd children in Fatima are private revelations. Private revelations do not add anything to the deposit of faith as a whole:  “It is not their role to improve or complete Christ’s definitive Revelation, but to help live more fully by it in a certain period of history,” according to the Catechism of the Catholic Church (art. 67). The messages of Mary at Fatima helped to better understand what the faith in Christ required to hold onto under the serious threats to the Church in the twentieth century.

A specific guidance from Mary at Fatima was her call to consecrate Russia, but also other countries or persons, to her Immaculate Heart. The heart represent the interior of the person here, and also the conscience, where the heart of man’s relationship with God lies. We call Mary’s heart immaculate because God safeguarded her from the original sin from the moment of her birth, and also because she remained free from sin in the rest of her life.

The consecration to her Immaculate Heart means two things specifically. Firstly, this consecration means that we want to follow Mary in the choice that she made in her heart of hearts, when the angel asked her to be the mother of God’s Son. She expressed her yes to God with the words, “I am the handmaid of the Lord. May it be done to me according to your word.” Like Mary, we want to achieve a complete consecration of ourselves to Christ.

We realise, however, that we can’t do so on our own and need God’s grace. And this brings us to the second important meaning of the consecration to the Immaculate Heart of Mary: it also expresses that we consecrate ourselves to her motherly care. In other words, that we entrust ourselves to her intercession with God.

Pope John Paul II said this his life was saved on 13 May 1981 because Mary deflected the trajectory of the bullet that could have killed him. That bullet is now incorporated in the crown of the statue of Mary in Fatima. To that protecting hand of Mary, through her intercession, the Dutch bishops entrust their dioceses in this Vespers. We pray that Mary places the path of the Church and our personal lives in the protective hands of the Risen Lord, through her constant intercession. Amen.” 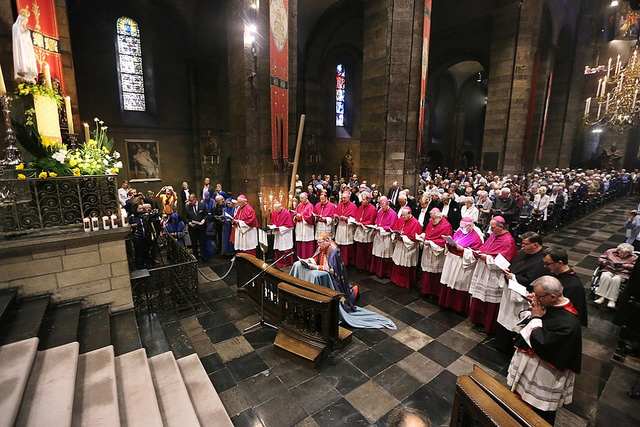 The bishops were joined by numerous priests, religious, seminarians and lay faithful, filling the medieval basilica. Following the consecration, representatives of various groups lit candles at the statue of Our Lady of Fatima.

As 13 May was also the feast day of St Servatius, the first bishop in what is now the Netherlands, several bishops briefly visited the crypt where his remains lie, in the Basilica of St. Servatius, also in Maastricht. While some 130 altar servers from Germany celebrated Mass in the church above, the bishops prayed at the tomb.