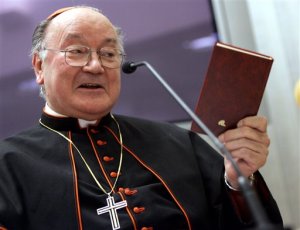 One day before the admission of six new members to the group of cardinal electors, the number of that group drops with one to 114. Renato Raffaele Martino reached the age of 80 today and has thus became ineligible to vote in a future conclave.

Hailing from the southern Italian town of Salerno, Renato Martino entered the Holy See’s diplomatic service in 1962, five years after his ordination to the priesthood. He earned a doctorate in canon law in that time. Fr. Martino served in various countries, among them Nicaragua, the Philippines, Lebanon, Canada and Brazil.

In 1980, he was consecrated to bishop and made titular archbishop of Segermes in modern Tunisia. Archbishop Martino was sent to head the diplomatic missions in Thailand, and Laos. In 1981, he also became such in Singapore in addition to his other positions. Brunei and Malaysia followed in 1983.

In 1986, he was reassigned to the high-profile position of Permanent Observer to the United Nations. In his time at the UN in New York, Archbishop Martino was an outspoken critic of the American invasion of Iraq in 1991. Another important call, related to his future functions in Rome, was his call for a safe heaven to be created for Tutsi refugees in Rwanda, to prevent the death of 30,000 people.

Archbishop Martino would continue in this position until 2002, when he was recalled to Rome to become president of the Pontifical Council for Justice and Peace. With that position came the red hat, and Cardinal Martino was created in 2003, in Blessed John Paul II’s last consistory. He became cardinal deacon of San Francesco di Paolo ai Monti. As head of Justice and Peace, Cardinal Martino intervened, to no avail, on behalf of Terri Schiavo, in the widely-covered case of her euthanasia. He also spoke out against the death sentence against Saddam Hussein and called for a international peace conference for the Middle East. He was once again openly against American interventions in Iraq. Later, he was involved in peace conferences between Israel and Palestinians, and likened Gaza to a “huge concentration camp”. In another example of his strongly pro-life position, Cardinal Martino  urged Catholics to stop donating to Amnesty International when that organisation decided to advocate abortion in 2007.

From 2006 until his retirement in 2009, Cardinal Martino was also the president of the Pontifical Council for the Pastoral Care of Migrants and Itinerant People.

Following his retirement, Cardinal Martino remained a member of the Congregation for the Evangelisation of People, the Pontifical Council “Cor Unum” the Administration of the Patrimony of the Apostolic See and the Pontifical Commission for Vatican City State. His pro-life attitude was rewarded in 2009 with the awarding of the title of Honorary President of the Dignitatis Humanae Institute in Rome. In 2011, in his last major diplomatic endeavours, Cardinal Martino visited Yangon, the capital of Myanmar, where he met with Aung San Suu Kyi.