It’s been quite the year for the Church in the world, in the Netherlands and here on the blog. In this post, I want to look back briefly on what has transpired. What happened before will, in many cases, have its effect on what will happen in the coming year.

The variety of events has been great, but if we had to characterise 2012, we can of course list the major stories: the two consistories for the creation of new cardinals, the ongoing abuse crisis and the efforts in the Netherlands and Rome to deal with it, the Synod of Bishops, the start of the Year of Faith, the retirements, appointments and deaths, the local stories in my neck of the woods and the (mis)representation of the Church in the wider world. These can all characterise the year for the Catholic Church. But since there are as many interpretations as there are readers, I’ll limit myself to presenting the major stories on my blog per month.

For this blog, it has been a good year. With 87,017 views it has been the best year yet, and I am happy to note that I have been able to provide stories, opinions and translations that have been picked up well by other bloggers and media. The pope’s letter to the German bishops on the new translation of the Roman missal, for which I was able to create an English working translation; the Dutch translation of the Christmas address to the Curia; a German interview with Archbishop Müller and my list of surviving Vatican II Council Fathers are examples of this. Both local and international media picked these up, resulting in increased interest for my blog. For that, thank you.

But now, let’s once more go over 2012 and look back on what happened in that year:

February:
– Dutch-born South-African Bishop Everardus Baaij passes away.
– Cardinal Levada opens a major symposium on sexual abuse in Rome.
– At the same symposium, Msgr. Charles Scicluna tells it like it is.
– The bishops of Belgium reply to a modernist movement among priests and laity.
– Cardinal-designate Eijk is interviewed by Zenit.
– Cardinal-designate Dolan delivers a landmark address about the new evangelisation.
– 22 new cardinals are created in the consistory of 18 February (new Cardinal Eijk pictured).
– Responsibilities within the Dutch bishops’ conference are reshuffled.
– In Germany, Bishop Reinelt retires.
– Dominik Schwaderlapp is appointed as auxiliary bishop of Cologne.
– In Mainz, Bishop Guballa passes away after a long sickbed.
– Cardinal Eijk returns home with a pastoral letter on the Eucharist.

March:
– Cardinal Eijk announces that he will be keeping a closer eye on the celebration of the liturgy.
– Cardinal Quezada Toruño turns 80.
– Cardinal Sánchez passes away.
– Cardinal Simonis speaks to Zenit about the Second Vatican Council.
– Copenhagen’s Bishop emeritus Martensen passes away.
– The Dutch bishops respond to a new horrible chapter in the abuse crisis.
– Coptic Pope Shenouda II (pictured) passes away.
– The Diocese of Haarlem-Amsterdam makes public all the cases concerning sexual abuse by clergy.
– A new presidency for the COMECE.
– The Dutch bishops issue a letter concerning the celebration of the Easter Triduum, and the need to return its focus to the Eucharist.
– Pope Benedict visits Mexico and Cuba.
– Bishop Schwaderlapp is consecrated.

April:
– Cardinal Egan turns 80.
– In the Diocese of Groningen-Leeuwarden, the vicar general announces he will enter a monastery.
– In a letter to parliament, The Dutch bishops outline four developments in the fight against sexual abuse.
– Pope Benedict directly addresses groups of disobedient priests and laity.
– Cardinal Daoud passes away.
– Cardinal Eijk reveals a monument for victims of sexual abuse in the Church.
– Cardinal Aponte Martínez (pictured) passes away.
– A parliamentary committee hears the ‘contact group’ for victims of sexual abuse.
– The Dutch chapter of the Equestrian Order of the Holy Sepulchre of Jerusalem invests new members in the cathedral of Groningen-Leeuwarden.
– Pope Benedict writes a letter to the German bishops and enters the debate about the new German translation of the Roman Missal.

May:
– After 66 years, the Belorussian Diocese of Pinsk finally gets a new bishop.
– A new page on the blog, about my conversion story.
– The annual pilgrimage to Our Lady of the Garden Enclosed takes place.
– Cardinal Vlk turns 80.
– Cardinal Eijk takes possession if his title church.
– The Deetman Commission undertakes a new abuse investigation, this time into the abuse suffered by women.
– Berlin’s Cardinal Woelki is misunderstood about homosexuality.
– The cathedral of St. Joseph receives a new altar (Bishop de Korte anointing it pictured) and marks the 125th anniversary of its consecration.

June:
– Pope Benedict XVI visits Milan.
– New priests.
– Cardinal Quezada Toruño passes away.
– Florian Wörner is appointed as auxiliary bishop of Augsburg.
– The bishops of Roermond publish a brochure about Communion.
– The Dutch bishops follow suit with a letter about the same topic.
– Cardinal Schwery turns 80.
– The Instrumentum laboris of the Synod of Bishops on the New Evangelisation is published.
– The logo for the Year of Faith is revealed (pictured).
– A round of personnel changes in the Curia.
– Dutch Father Louis Tijssen is declared venerable.
– Archbishop Nowacki is appointed as the new nuncio to Scandinavia.
– The Heel abuse affair breaks.
– President-Delegates are appointed for the Synod.

July:
– Archbishop Müller (pictured) is appointed as prefect of the Congregation for the Doctrine of the Faith.
– About half of the world’s bishops’ conferences have formulated guidelines against sexual abuse.
– Cardinal de Araújo Sales passes away.
– Bishop Borys Gudziak is appointed as Apostolic Exarch of France.
– Cardinal Stafford turns 80.

August:
– Bishop Wörner is consecrated, while Bishops Wehrle and Siebler retire.
– The Diocese of Rotterdam publishes a Prayer for Faith.
– Cardinal Rosales turns 80.
– Cardinal Shan Kuo-Hsi passes away.
– Cardinal Murphy-O’Connor turns 80.
– A Dutch priest’s apparent refusal to baptise the child of a lesbian couple fails to escalate much.
– Cardinal Martini (pictured) passes away.

September:
– Cardinal Martini’s last interview causes some debate.
– Bishop de Korte marks the 25th anniversary of his ordination to the priesthood.
– Rumours surface that priests in the Diocese of Groningen-Leeuwarden are unhappy with their new appointments.
– Elections in the Netherlands result in a loss for the Christian parties.
– Cardinal Rubiano Sáenz turns 80.
– Pope Benedict (pictured) visits Lebanon.
– Misunderstandings about ecumenism in the Diocese of ‘s Hertogenbosch.
– Pope Benedict XVI appoints 36 Synod Fathers.
– Cardinal Baldelli passes away.
– Questions arise about the German ‘Church tax’.
– The first progress report on how the Church deals with abuse claims is released.

October:
– German Bishops Wanke and Schraml retire.
– Dutch missionary Bishop Joseph Willigers passes away.
– Morocco does not take kindly to the arrival of a Dutch ‘abortion boat’.
– Vatican Promotor of Justice Charles Scicluna is recalled to Malta to become auxiliary bishop.
– The Synod of Bishops on the New Evangelisation begins (pictured).
– Cardinal Erdö outlines eleven points for the new evangelisation of Europe.
– Belgian Curial Bishop Frans Daneels is made an archbishop.
– The Year of Faith begins.
– Pope Benedict announces a small consistory for November.
– The Synod of Bishops closes.
– An attempt at stopping liturgical abusive carnival Masses in Eindhoven.
– Amsterdam’s St. Nicholas church is to be made a basilica. 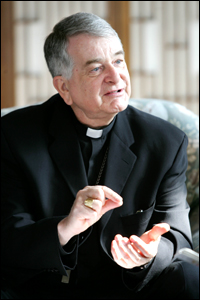 Lost amid the Christmas celebrations, the onset of the new year and the announcement of a consistory, is the news that, on 5 January, the Holy Father appointed Archbishop Emil Paul Tscherrig to be the new Papal Nuncio to Argentina. In the past four years, Archbishop Tscherrig was Nuncio to the Nordic countries: Denmark, Norway, Iceland, Sweden and Finland. In Argentina, the Swiss-born prelate succeeds Archbishop Adriano Bernardini, who was called to Italy last November.

The diplomatic mission of the Holy See in Scandinavia dates from 1960, when it was established as an apostolic delegation. In 1966, Finland got a Nunciature, followed ten years later by Iceland. In 1982, the Nunciatures to Norway and Denmark were branched off and the remainder of the Apostolic Delegation to Scandinavia became the Nunciature to Sweden. Although each Nunciature is its own entity with its own diplomatic relations with the state it resides in, a single Nuncio has always been appointed to all of them, a reflection of the fact that the Nordic countries are home to relatively few Catholics.

In Argentina, Archbishop Tscherrig will begin his fifth diplomatic mission, after having represented the Holy See in Burundi, the Antilles, Korea and Mongolia and Scandinavia.