In the list of search terms that have led people to my blog I have been noticing a number of specific questions. I thought it might be interesting and useful to address some of them, and try and provide an answer. I have looked back over the past week and selected questions that are not too general, and have a clear answer.

1: Who is Archbishop Fortunatus Nwachukwu? He is the Apostolic Nuncio to Nicaragua since 12 November 2012. 52 years old, the native Nigerian was consecrated as a bishop in 6 January. Before his current position as the Holy See’s ambassador to the government and Church of Nicaragua, he was Head of Protocol at the Secretariat of State, and before that a priest of the Diocese of Aba in Nigeria. As an archbishop without a diocese of his own, he has been given the titular archdiocese of Aquaviva, which is located south of Bari in Italy.

2: How many Catholic Churches are under Diocese of Rotterdam? Encompassing virtually the entire Dutch province of Zuid-Holland, the Diocese of Rotterdam is the most densely populated of the Dutch dioceses. It is home to more than half a million Catholics, of whom about 8.6% are regular Churchgoers. Bishop Hans van den Hende has been the ordinary since 10 May 2011. The diocesan website states that there are 78 parishes and 7 parish federations in the diocese. As for the number of churches, we may assume that each parish has use of several churches.

3: How come Berlin’s cathedral chapter gets to elect its own bishop? Like all dioceses, the cathedral chapter of the Archdiocese of Berlin took over the day-to-day affairs of running the diocese after the previous archbishop, Cardinal Georg Sterzinsky, retired. They had the obligation to choose an Apostolic Administrator until a new archbishop was appointed.  They also were to create a so-called terna, a list of three names which they sent to the Apostolic Nuncio. This list, with any additions and notes that the Nuncio added, was sent to Rome. Another terna came from the German Bishops’ Conference. These lists, and any other pertinent information, was then used by the Congregation for Bishops to supply a final list to the Pope, who then made his final choice. In that choice, the Pope had no obligation to actually select one of the names on the list. He could theoretically have chosen another priest to become archbishop of Berlin. Whether Cardinal Rainer Woelki, who was appointed on 2 July 2011, was on any of the ternae remains anyone’s  guess.

The cathedral chapter, then, does not elect a bishop by itself, but it does have a say in the matter, and an important role in providing the necessary information by which a bishop is selected.

Three questions, hopefully with informative answers, to start with. More to come as they appear among the search terms.

Although much of the attention was on the prefect of the house, there was more in today’s ceremonies at St. Peter’s Basilica.

It was the Gänswein Show, certainly, but not only that. The popular new Prefect of the Papal Household was made an archbishop yesterday, but so were three others: Fortunatus Nwachukwu, the former Head of  Protocol at the Secretariat of State who will take up duties as Apostolic Nuncio to Nicaragua; Nicolas Thevenin, formerly a Protonotary in the Apostolic Household and now the new Nuncio to Guatemala; and Angelo Zani, the new Secretary for the Congregation for Catholic Education.

The four new archbishops were consecrated by Pope Benedict XVI, with Cardinal Tarcisio Bertone and Zenon Grocholewski serving as co-consecrators. And it is from the former of these that the meat of the day comes: like previous Epiphany homilies, this year‘s again strongly ties the office of bishops into the feast of the Epiphany. Taking the Epiphany as the feast of the destination of the pilgrimage of the people of God, the Pope writes, “It is the task of the Bishop in this pilgrimage not merely to walk beside the others, but to go before them, showing the way.”

The Holy Father than poses the concrete question of whether we can see the Magi as examples of “what a Bishop is and how he is to carry out his task.”

“Here we come to the question: What sort of man must he be, upon whom hands are laid in episcopal ordination in the Church of Jesus Christ? We can say that he must above all be a man concerned for God, for only then will he also be truly concerned about men. Inversely, we could also say that a Bishop must be a man concerned for others, one who is concerned about what happens to them. He must be a man for others. But he can only truly be so if he is a man seized by God, if concern for God has also become for him concern for God’s creature who is man. Like the Wise Men from the East, a Bishop must not be someone who merely does his job and is content with that. No, he must be gripped by God’s concern for men and women. He must in some way think and feel with God. Human beings have an innate restlessness for God, but this restlessness is a participation in God’s own restlessness for us. Since God is concerned about us, he follows us even to the crib, even to the Cross. “Thou with weary steps hast sought me, crucified hast dearly bought me, may thy pains not be in vain”, the Church prays in the Dies Irae. The restlessness of men for God and hence the restlessness of God for men must unsettle the Bishop. This is what we mean when we say that, above all else, the Bishop must be a man of faith. For faith is nothing less than being interiorly seized by God, something which guides us along the pathways of life. Faith draws us into a state of being seized by the restlessness of God and it makes us pilgrims who are on an inner journey towards the true King of the world and his promise of justice, truth and love. On this pilgrimage the Bishop must go ahead, he must be the guide pointing out to men and women the way to faith, hope and love.” 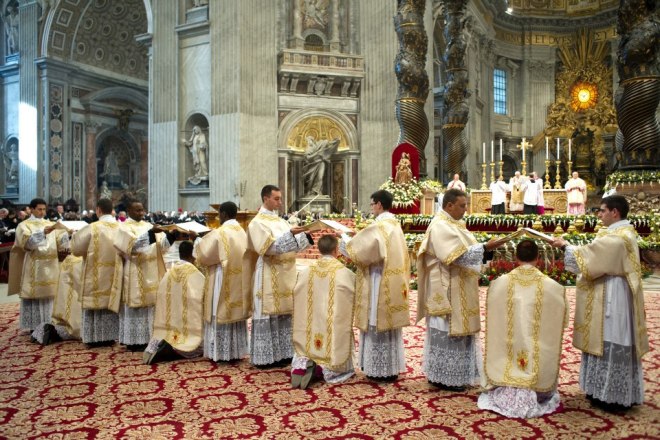 There’s plenty more food for thought, and not only for bishops, in the homily. Read the English text via the link above, or a Dutch translation via RKDocumenten.nl here.