While fog hides the view from my window, a red dawn rises over Rome as Pope Benedict XVI gets ready to create six new members of the College of Cardinals. Who are these princes of the Churches again, in the smallest crop since the 1977 consistory which, among others, saw one Joseph Ratzinger made a cardinal?

Archbishop James Michael Harvey was, until yesterday, the Prefect of the Papal Household. As was announced earlier, he was moved yesterday to become Archpriest of the Papal Basilica of St. Paul-Outside-the-Walls. In many eyes, this is a classic promotion out of the limelight for Cardinal-designate Harvey’s role in the Vatileaks case. Under his watch, papal documents were stolen and published, with the archbishop defending the convicted papal butler Paolo Gabriele before his actions became clear. While he was never even implicated, it is said that Archbishop Harvey submitted his resignation to the pope after Gabriele’s arrest. While prefects of the Household are usually eventually made cardinals, this happens when they were past retirement age. Cardinal-designate Harvey is 63.

As archpriest of a papal basilica, he has certain custodial and liturgical functions (which are worthy in their own right), but very few, if any, well-defined duties in the Roman Curia.

Cardinal Harvey will be a Cardinal-Deacon. 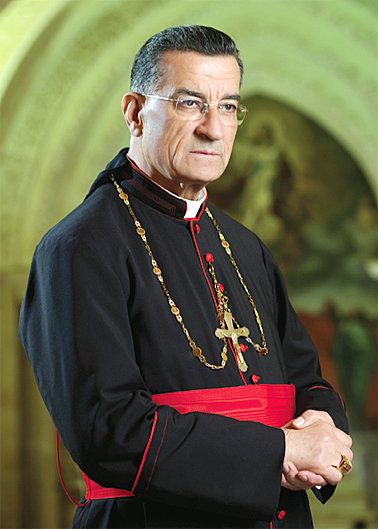 Patriarch Béchara Pierre Raï is the head of the Maronite Catholic Church of the Middle East, especially Lebanon. His three predecessor were also cardinals, so his creation is not a surprise.  And perhaps the pope’s recent visit to Lebanon also played a role in cementing his nomination. Patriarch Raï is 72 and will be made a Cardinal-Bishop by virtue of his position at the head of a Catholic Church in union with Rome. He will not be given a title church, as he is outside the hierarchy of the Latin Church, but not outside the world Church. 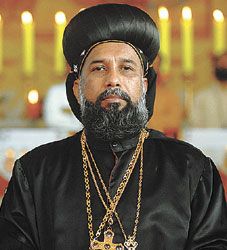 Archbishop Baselios Cleemis Thottunkal also heads a separate Church in union with Rome, the Syro-Malankar Church of India. He will be the youngest cardinal of all, and will be the first archbishop of Trivandrum to be made a cardinal. During the Synod of Bishops on the new evangelisation his bearded presence was already much noticed. Cardinal Thottunkal will be a Cardinal-Priest. 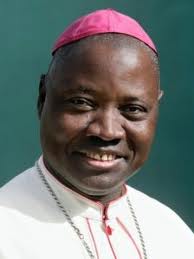 Archbishop John Olorunfemi Onaiyekan is the much-respected archbishop of Nigeria’s capital, Abuja. Most recently, he unequivocally spoke against the terrorist actions of Boko Haram in the north of Nigeria, while at the same time seeking relations with Muslims in Nigeria. He is also strongly against a proposed division of the country into a Christian south and a Muslim north. Nigeria’s old capital, Lagos, is also headed by a cardinal, but the value of the western country in the Church is surely reflected by this appointment if a second one, who will be a Cardinal-Priest.

Archbishop Jesús Rubén Salazar Gómez is the archbishop of Bogotá, capital of Colombia, a nation which, considering its Catholic population, was long overdue for the appointment of a second cardinal. Clearly pro-life, Cardinal-designate Salazar Gómez will also be a Cardinal-Priest. 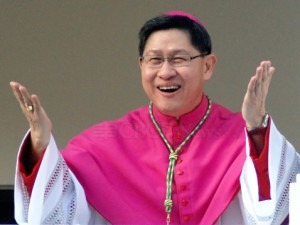 Archbishop Luis Antonio Gokim Tagle, is the rising star of the Church in Asia. Heading the major Archdiocese of Manila in the Philippines, Cardinal-designate Tagle will be the second-youngest cardinal of the bunch. He has his critics, but in general he is enormously popular, not least because of his use of social media. Affectionately referred to as “Archbishop Chito”, Cardinal-designate Tagle is a very welcome addition to the Asian part of the College. He, too, will be a Cardinal-Priest.

With the elevation of this international group, the first since 1924 to include no Europeans, the group of cardinals who are eligible to vote in a conclave reaches 120.

As for today’s ceremony, which will be conducted according to the exact same norms as this year’s previous one, it can be viewed via the Vatican Player, while the booklet for the celebration may be found here. Things are set to get rolling at 11am local time, which is 10am GMT.

With the six-cardinal consistory of 24 November approaching, it is once again a good time to take a look at the available title churches or deaconries that the new cardinals will be receiving.

As of today, there are ten titles available, and only five cardinals awaiting one. Patriarch Béchara Boutros Raï will not be receiving a title Church in Rome since he is not part of the clergy of the Roman Catholic Church. Instead, his own Maronite patriarchate of Antioch will also be his title. In a way, this reflects the fact that, in his Maronite Catholic Church, he holds a position similar to the pope in the Roman Catholic Church. He is the first bishop among equals, but the pope has further duties, rights and position that makes it possibly for the patriarch to be made a cardinal of the Church by the pope.

Cardinal-designate Raï position as patriarch will, however, mean that he will be a cardinal with the rank of Cardinal-Bishop. Upon his creation, there will be ten of these.

This leaves five cardinals who will be given a  title church. One of these, being a curial prelate,will be made a cardinal-deacon. He is Archbishop James Harvey, currently the prefect of the Papal Household, but after his creation he will become archpriest of the papal basilica of St. Paul-Ouside-the-Walls. There are five vacant cardinal deaconries, which could be given to him. The one with the longest pedigree is the ancient Santa Maria in Cosmedin (pictured at right), vacant since 1967. Also possible are two deaconries which only recently became vacant: Sant’Anselmo all’Aventino, last held by Cardinal Baldelli until his death in September; and San Pio V a Villa Carpegna, vacant since the passing of Cardinal Sánchez in March.

The four future cardinal-priest have a choice between ten vacant title churches. Among them are the late Cardinal Martini’s Santa Cecilia and Cardinal Shan Kuo-Hsi’s San Crisogono, which has been held by cardinals from South-America, Africa and Asia in succession, so it may well be given again this time around, to either Archbishops Onaiyekan, Salazar Gómez or Tagle.

Any guesses, with such as mall group of new cardinals, including the first Syro-Malankar cardinal, are just guesses. Of course, a new Roman church may be elevated to a cardinal title as well. There are a fair number of title churches which have relatively recently been made so, with only previous cardinal-protector. Guesswork. We’ll all find out on the 24th…

The consistory that Pope Benedict XVI announced at today’s general audience, and set for the 24th of November, has all the appearances of an in-between consistory. With only six cardinals to be created it is quite small, and it is as non-European as the previous consistory was European.

It’ll be Benedict’s fifth consistory, and by far his smallest. In fact, it will be the smallest consistory since Pope Paul VI elevated 4 cardinals in 1977. It will also be the first time since 1929 that there have been 2 consistories in one calendar year.

The six prelates to be elevated are:

Archbishop James Michael Harvey (63), the Prefect of the Papal Household, who will be appointed as archpriest of the papal basilica of St. Paul-outside-the-Walls..

Archbishop Tagle and Patriarch Raï were among the expected choices for the red hat at a future consistory, but the others were not. Only Archbishop Thottunkal is from a see which until now was not traditionally associated wih the title of a cardinal.

Archbishops Thottunkal and Tagle will be the youngest members of the College.

Another indicator that this is something of an in-between consistory, intended to keep the number of electors at or near 120, is that there are metropolitan archbishops of traditionally cardinalatial sees – such as Léonard of Brussels, Nichols of Westminster, Chaput of Philadelphia and Gómez of Los Angeles – still awaiting the red hat. At least some of them will be made cardinals in the future, but, apparently, now is not yet the time.

Barring any deaths, next month’s conclave will bring to size of the College of Cardinals to 211, with a round 120 of them being electors (Cardinals Arinze and Martino will turn 80 beforehand), including all six new ones.